Forget for a moment the twists, turns, and accidental coincidences that brought me to London and, later into my trade. I do remember vividly imagining what was in store for me as I prepared for the trip, then flew to Heathrow, and finally walked through the front doors on Tanner Hill in Deptford.

I liked nice bicycles and thought they were beautiful. It never occurred to me how they were made. My fantasy was that I’d arrive at a place more like a lab, with folks in white coats, and nice Formica bench tops all around. “Which way to radiology?“, and all that kinda’ stuff.

The Witcomb shop was a typical bare-bones, made-by-hand workshop and all that it implies. Low ceilings. An outhouse. Dusty. Just the basics. No fixtures or alignment tables. There were a few Rube Goldberg-y contraptions that held one thing, balanced another, and let you quickly complete a task.

The workers there were masters of these “tools” and approached framebuilding from a completely pragmatic stance. No one ever paused, took a step back, and lined up a thumb with a lug to take a measure of its’ symmetry or shape. Cutting and joining metal was a job of work, not a calling. It was a far cry from the PMS (Precious Maker Syndrome) that dots the landscape now.

I never got to make a frame during my entire stay in England, but the experience became the best possible foundation for what would follow some years later. Their no-nonsense attitude got into my DNA early, and has remained.

Here’s David Cotton at his bench, about fourteen feet from where I once stood. His station was down below by the refrigerator and coffee making area. Good times atmo.
. 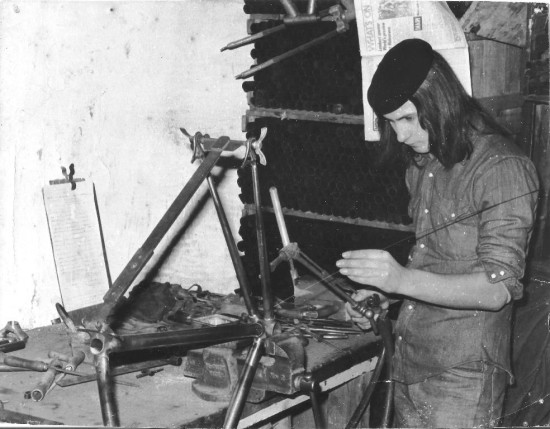