Most people recall their first, but few their second. After pedaling my Atala Gran Prix around Bayonne for a year, I wanted more. I was drawn to some ads in Bicycling Magazine that included the tagline, “Winner of 14 World Championships“. Frejus – my next obsession.

The trip to Harlem was easy. Path Train from Journal Square to Christopher Street. Screw off in the Village for a bit. And then take the subway uptown. The landscape, including but not limited to Tommy Avenia’s retail establishment, was a stark contrast to what I was used to. But that’s where the bicycles were and it was the next stop on my journey.

I liked my 22″ Tour de France though I never knew why. The Frejus legacy probably. It’s funny how owning something can affect your self-esteem atmo.

Every time I needed service, I’d make the schlep back to Avenia’s, he’d write a ticket, and I’d return a week later. And for those with an imagination, his shop was mass of bicycles leaning next to and on top of each other. There was more touching and embracing in that small space than in your favorite scene from Caligula.

On one occasion I collected the Frejus and noticed a big scratch that wasn’t there a week earlier. “It’s a bike, not a picture frame.”, said Tommy’s brother, Frank. I obsessed a bit less after that trip.
. 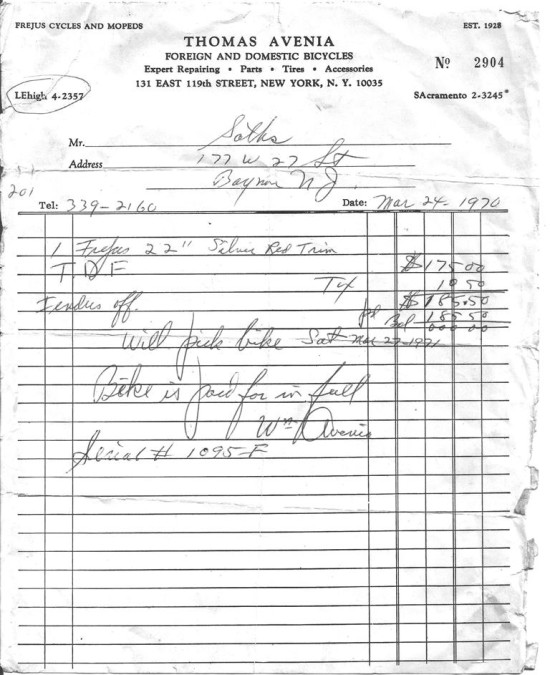