The Connecticut Yankee Bicycle Club began life in the mid 1960s and lasts to this very day. Witcomb USA started supporting the group in 1972. When I came back from England and took a job in East Haddam, I became a member.

For most of the decade, and through many changes, one constant was that my pal, Nick Dyslin, found the resources to keep the riders organized and in matching kits. Whether the jerseys said Witcomb USA, Knight Fabrications, Alec Bird, or Dawes, the group was always well oiled and looked elegant.

By 1980 CYBC’s presence as a force on the racing circuit was a memory. That changed in 1982 when another pal (and CYBC alum), Martin Bruhn, asked me about the status, since I kept sending in the club renewals despite my own racing being minimal.

Martin suggested getting the band back together. He assembled a troupe that would become the next chapter in CYBC’s existence. He asked if I would sponsor it and, without pause, I said yes. I wanted to help these guys just as Nick did for us when we were pinning on the numbers. Thus began my brand’s support of the team.

We’ve seen a lot of changes since then atmo.
. 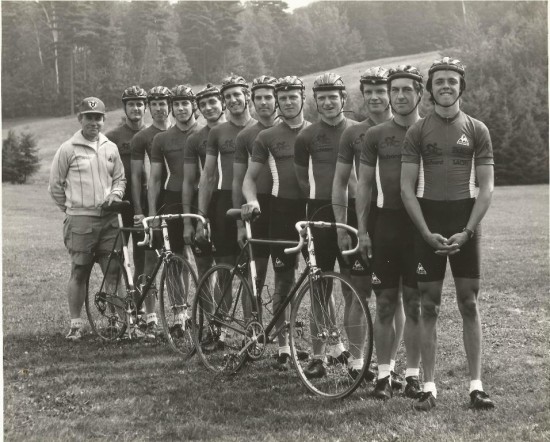