I’m thinking the year was 1983. A stage race in Connecticut? Yes, the Schiff Vitamins Bicycle Tour Of Champions. Short lived. Maybe two years at most. La Boca’s Mike Perkins somehow constructed an event by mining some preexisting races, adding a time trial and maybe another circuit whose location evades me, and we had ourselves a near week long gala that was almost, but not quite, a big deal. It was a big deal for us locals though, especially in New England.

This was our junior team for the race. Ya’ have Lizard (Lawrence Cook), Eric Prime, Paul Kelly, Michael “Bruiser” Brousseau, and Stuart Orr. Data point: The Lizard’s Le Coq skinsuit is the actual piece of clothing that the French company, then a sponsor, that spawned the red and white thing. The garments arrived before any decisions for a paint scheme were concluded. Matching the bicycles to the outfits seemed like a good idea. 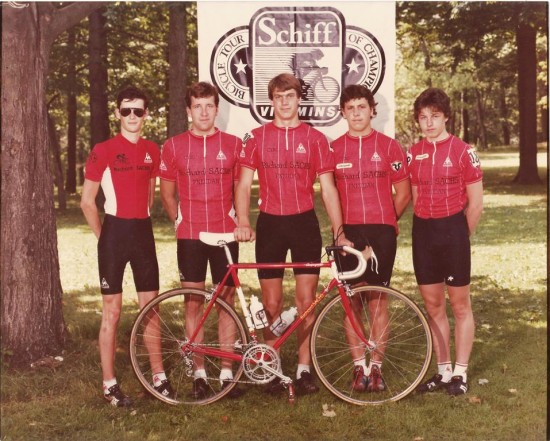