My first trip to Milan in 1979 was an amalgam (I love that word, amalgam…) of travel, relaxation, and industrial espionage. When I returned in 1981, I was in full-on spy mode. It was all about trying to find the next rung on the ladder. I had been making bicycles for almost a decade and was tired of the food chain I was part of. There was this sense that the trade in Europe was pushing boundaries exponentially, but at home it seemed stale.

I had always used components that weren’t commonly available in North America, having secured some private lines as far back as 1975. But these channels were closing. And I couldn’t see making my frames with the crap that was being served to my niche by the distributors here.

By fate, along with some surreal help from Howie Cohen of Everything Bicycles fame (as well as for his product placement coup in the movie, E.T.), I began a relationship with Takahashi Press in Tokyo (the one in Japan). Mr. Kikuchi, the firm’s president, personally answered all of my mail and made me feel like a valued customer.

The letter mentions a set of lugs I designed. We were going to have Hitachi do the lost wax casting. The parts made it to the market. But they were clunky. Somehow, the elegant curves and sinewy edges I originally created looked wrong. Many framebuilders began using them, as did some major production houses. But I was left cold, even though these came from my loin. The project was a very good idea, but perhaps it was a generation too soon for me to be using my own lugs.
. 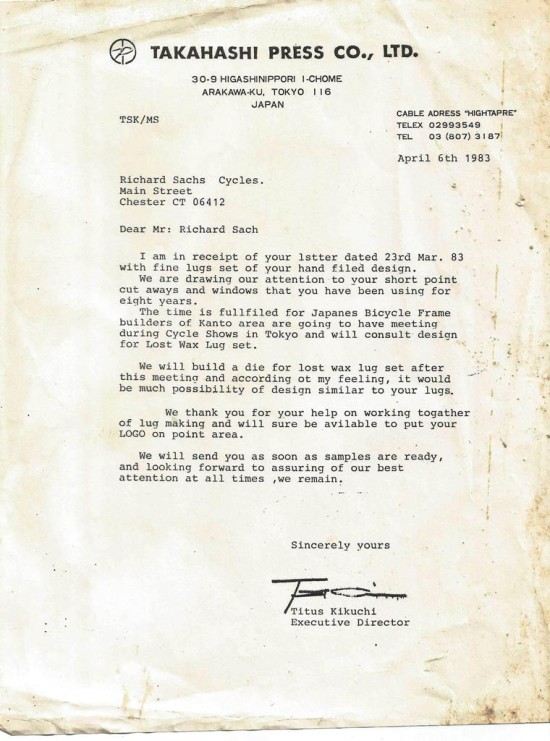