In the middle 1980s, and through a pal who handled my frame sales in the Philadelphia area, I had an opportunity to fill a commission for Robert Montgomery Scott. It was just a name on an order form. Sometime later, after several thank you notes from the client and seeing stories that pointed back to his pedigree and profession, I became more familiar with him. Then there were the articles in Town & Country and periodicals of that ilk. One happened to mention Scott’s close friendship with Walter Annenberg – a name needing no introduction here.

I wrote Mr. Scott (we had already been trading letters) and said that I saw the story and wanted him to know that I too had a connection with or to Mr. Annenberg. I told him about my Peddie School years and the accidental events that later brought me to London, and then to Connecticut, and finally to start a bicycle business he’d one day, some 15 years later, be supporting.

Mr. Scott had his secretary turn my notes over to Walter Annenberg. In them, I praised the Peddie School experience and couldn’t be more emphatic about how fortunate Peddie boys were to have someone like Mr. Annenberg keeping the school relevant and endowed.

One day, nearly two decades after leaving the campus for the last time as a student, this letter arrived. I have no other piece of mail that simultaneously so surprised me to receive, or means as much to me. His story instilled an even deeper sense of school pride than I thought possible.
. 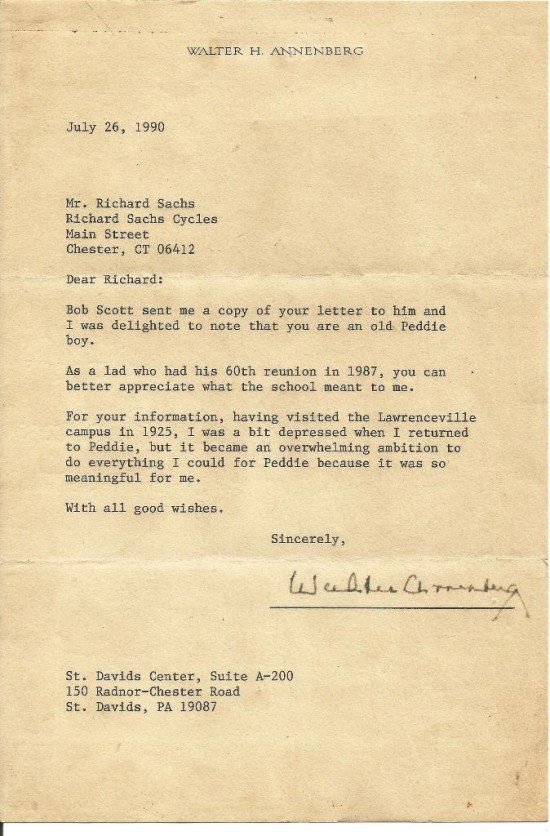