I started my business in the summer of 1975 from seeds planted the previous autumn. It took a while for the details to fall into place. I wasn’t content with the materials commonly available from mainstream suppliers then. In that era, we all bought and used the material local distributors served up. That was a pathetic state of affairs according to my opinion.

I was waiting on the I.C. fork crowns that Cecil Behringer designed, and would be sold by Arnold Industries. It took a little longer for these to come to market, but it was worth it. The initial order for 60 pieces was about a half year’s supply for me. I hit the bench time hard in those days, and reaching ten units a month just wasn’t that big a deal. My, how have things changed.

In its day, the Behringer parts had no equal. It was the first component cast to accept not only the blade cross section, but also had a precision channel into which the reinforcing piece could be brazed simultaneously with the complete assembly. This enabled it to be integral to the joint rather than simply a decoration added onto the surface. It all seems so sensible now. But in 1975, this was an innovation to beat the band. The best part included that I had an exclusive. I bought enough, and committed to enough, so that I could launch a brand with parts no one else had. I love shit like that.
. 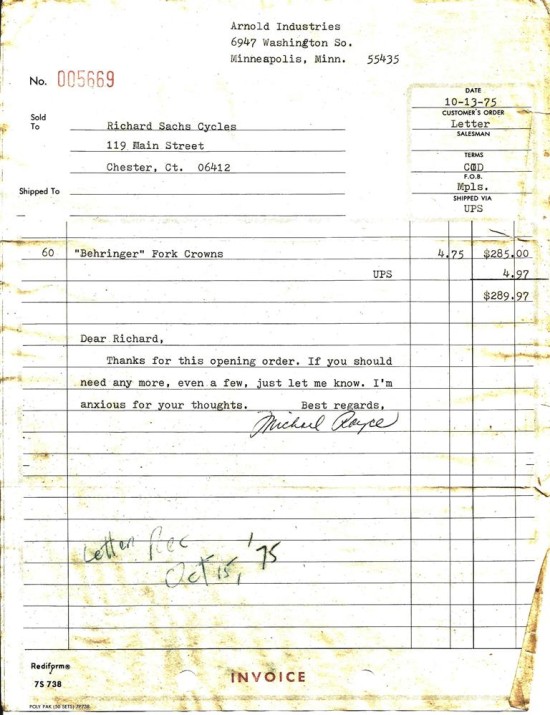