When I got home from a year in London working at the Witcomb family business, my intention was to return to the matriculation situation and start life as a student at Goddard College. That plan went sideways when I proposed to the school that, in return for my teaching a class in framebuilding – being fresh off the boat from an intense curriculum of sandwich fetching, coffee making, and filing brake bridges – in return for this, they’d cut me some slack on the tuition. They left that offer on the table, and I decided to continue my accidental adventure, never to sit in a classroom again atmo.

The Witcombs thought I’d fit in well with a stateside enterprise they’d entered into a few months prior, and Ernie Witcomb wrote a letter of recommendation for the folks at Witcomb USA. This company was set up to import and distribute the English frames as well as a line of industrial-made branded bicycles made in Wales. It was much later that frames made in East Haddam would appear, mostly as a result of, and a reaction to, the original business plans going awry.

During my very first few weeks employed in Connecticut, I had the chance to be a mechanic for C.Y.B.C, the local team that W.U.S.A. was sponsoring. This image shows us at the Tour d L’Est, a stage race in Quebec. That’s Bill Farrell, Rich Chillingsworth, Lans Christianson, Wally Herman, Jim Fraser, Damian Slivinski, and Nick Dyslin. The hair model with the smiling face attached is me. Note that Nick and I are sporting lavender-dyed jumpsuits that match the brand’s corporate colors.
. 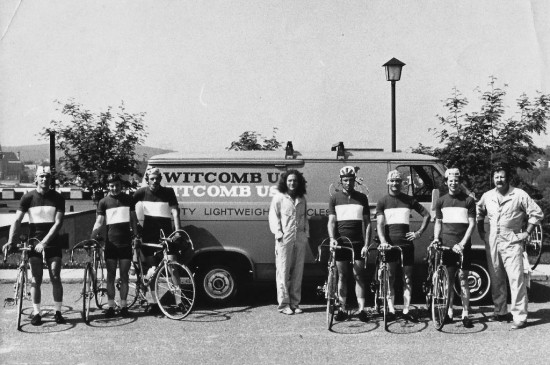