Len Preheim was a good pal. We traveled a lot together, the last time being some 20 days in northern Italy to attend the Milan Bicycle Show – we sandwiched it between visiting the workshops of every famous framebuilder known to man (so far). That was 1979. Lenny’s store, Toga Bicycle Shop on Avenue B, sold hundreds of my frames between 1976 and 1982. It was an alliance made in heaven.

I remember walking into the shop in 1977 (I think…) and he showed me a sketch and plan for a new team to be called Team Tempo Thunderbolts. I thought it was a God awful stupid name. Back then, everything was Such A Road Club, Clarion & Beer Wheelmen, or Dorking-Upon-Thistle CC. Now those were names.

Regardless, Lenny and I made a deal that included my supplying him with special frames. It was my first real team sponsorship. For four years, he chose the riders and I made them frames. The green and yellow paint scheme became well known in and out of the metro area, and Team Tempo Thunderbolts became a name that rolled off tongues across the country atmo.

Here are Lenny, Howie Reynolds, Jonathan Livesay, Dana Castro, Jimmy Keogh, and Tom Donahue. Knowing Preheim, the shot might well have been staged for an article in Interview Magazine. Lenny danced in many circles. 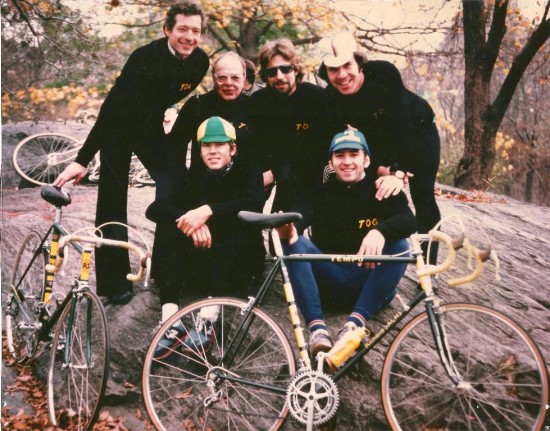