After a few years at Witcomb USA, I started my brand in late 1975. In February I had some bicycles at the International Cycle Show in New York. Into my booth walks Oliver Martin. Now, I know Butch from racing. He’s a legend. Two Olympics. Raced in Italy before anyone even heard of Punky Brewster. And one of the most elegant riders I ever saw. Just a summer before, I watched him take Brian Chewter to the line in a 2-up break in the last stage of the Tour de L’Est in Quebec.

I know Butch, but he and I never shared the same personal space. And I’m thinking, “Holy fucking shit. Butch Martin is standing next to me in my booth at the New York Show and talking to me about MY bicycles.” I was awestruck.

I was 23 years old and was able to miter and braze tubes, shape lugs, and knew which end of a file to insert into a file holder. But I yearned for more. I wanted what Omar had. So, I kinda’ sorta’ found a way to ask.

Could he possibly condense his entire experience with bicycle design and riding position into words I could read and understand – please, could he do that for me?

A few months later, five pages all numbered and stapled together arrived in the U.S. Mail. Butch had gifted me some of his wisdom. It was now up to me.

The words didn’t contain the “answers to life’s persistent questions…” but I do recall holding the letter in my hands some 39 years ago and thinking that my path to enlightenment starts here.
. 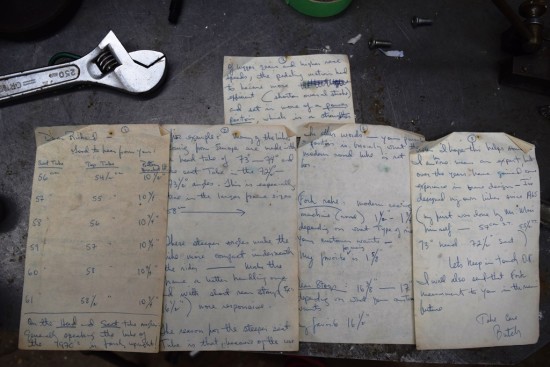