Doors open and close for a reason. We just don’t know what it is. I’ve been rerouted more times than I have opinions atmo.

Seniors at Peddie School could apply to four colleges – period. I selected Bard, Bennington, Antioch, and Marlboro. Yeah. I wanted to have a good time, use hallucinogens, and have many relationships. But it wouldn’t happen on these campuses. Four closed doors.

With no backup plan, I applied and got into Goddard and Franconia, and chose the Vermont school. My path now set, and I would be headed north in September. Then this note arrived. It’s not the acceptance letter – I have that one too. It’s the, “Sorry, we overbooked etc etc…” version informing me that my entrance was delayed until April. Doors close and open for a reason.

With a summer and then some to kill, I worked in Manhattan stocking shelves for a cosmetics company. I saw an ad in the Village Voice for a bike mechanic in Burlington (the one in Vermont). So, I quit one job and bought a one-way ticket on a Greyhound bus to get another. But that door was closed.

Stuck in Burlington, I worked at the Blodgett Pizza Oven factory by day and had a room at The Wilson Hotel by night. My way was lost for not getting that shop position. To right my self-esteem, I wrote to framebuilders in England and offered myself for free in return for the experience of seeing how bicycles were made. Nearly thirty letters sent. Three replies. Two said no. One said yes. To Witcomb Lightweight Cycles in London I flew.

No plan. No agenda. No expectations. And no college education. Doors swing both ways. I didn’t want to be a bicycle maker but years later, I became one.
. 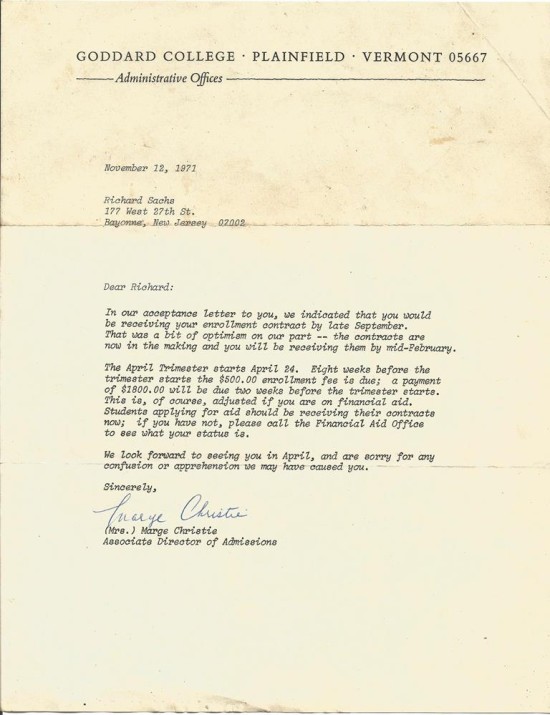