When I returned from 20 days in Italy in late 1979, I made every effort to use the experience and mirror what I saw. Nothing prepared me for the contrast between what I imagined the trade to be, and what I encountered. It was the last time in my rose-colored-glasses period as a FNG trying to get to the next rung – the last time I’d feel romantic about my trade. I returned a pragmatist and have remained one. Any emotion I was attaching to the, er – art of framebuilding, vaporized. I was impressed by the tools I saw used, the way men approached the many small steps that make up the whole of the assembly procedure, and the how each brand presented itself. And that included marketing collateral.

Here in the states, costs for 4 color printing were very high. But with my new found resolve, producing a new brochure became a priority. I hired a design firm (after vetting a bunch…), got some bad-ass studio photography, and wrote some convincing yet austere text about who I was, what I did, and what you’d get for ponying up and placing an order.

The result was a multi-page fold out piece of which I was supremely proud. But the budget was such that I decided these wouldn’t be distributed for free. I only mailed them out if folks sent the two dollars mentioned in the ads I placed in various magazines. Got myself a whole lotta’ envelopes with two dollars in them for a good long while.

I saved all the inquiries. Many were charming, engaging, and kinda’ sorta’ personal. Here’s one from 1980. I never closed this sale. Jeez I hope the cat made it out alive. 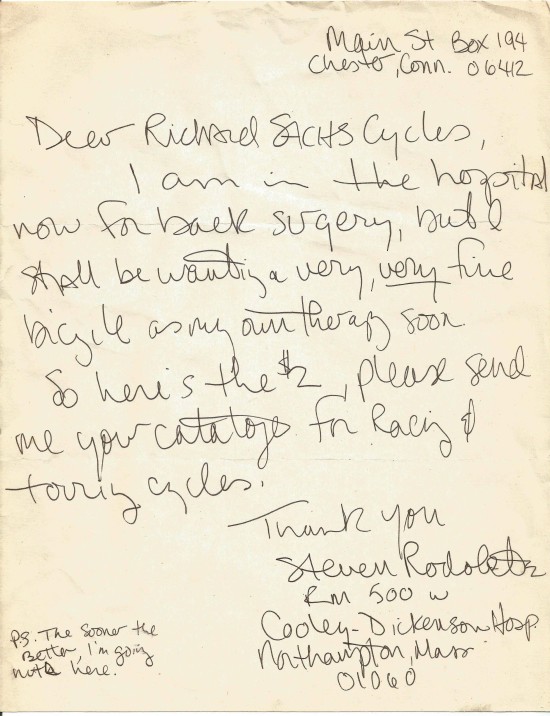