Lugs lengths aren’t measured in the traditional sense. But they vary enough for folks to love the ones they do. I’ve only loved one type, the short point lug. In the summer of ’75 (cue Bryan Adams…) as I was tooling up for my own dance, the only partner I was willing to hold close was made in France by Nervex. There seems to be some ambiguity about the actual name of the manufacturer. When I was a client, the wire transfers went to Établissement Aime DuBois. My frames were going to be presented with their Ref. 32 lugs or they’d never be presented. That’s how determined I was to start my brand, my way.

I’d managed to negotiate a few dozen sets from Lee Katz. His Turin Bicycle Co-op in Chicago had a division that supplied materials to the trade. By the time my bicycles were displayed at the International Cycle Show the following February, I was completely fluent in French, at least as far as lugs were concerned. Fortunately for me, a Monique Pegg visited my booth, asked about my work, and where I sourced parts. Ms. Pegg worked for M. Yvars in Paris. She explained that her firm represented Nervex and could supply the pieces I wanted, and without interruption.

Aligning with Monique Pegg was one of the first coups (that’s French for take that, bro’…) in my early years. Here I was, kinda’ sorta’ new, and with a pipeline to Europe. As the letter mentions, my initial purchase was for 250 sets of lugs. When that first batch arrived, I felt like King Shit. And to be honest, I felt similarly with each repeat order until 1982 at which time I finally took a mistress, the beautiful Samson cast parts designed by Tetsura Harada. 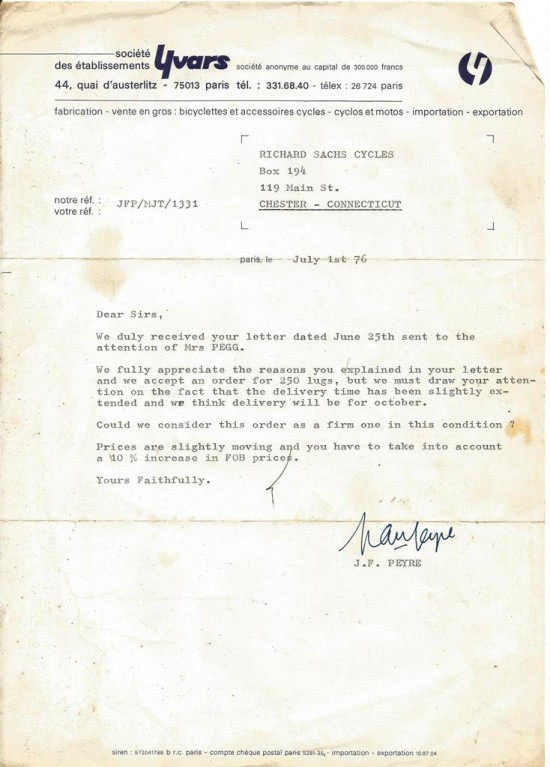