There were times before mail addressed to Richard Sachs at Main Street Chester, CT would get to me with just my name and the town showing. Or my names with 06412 somewhere near it. Then the fanciness set in. The local Postmasters began to adhere to codes from the outside world. Your actual door number and road has to be articulated. Your apartment number and floor had to be in full view. The simple times gave way to new rules that made looking at the day’s catch less beautiful. The envelopes no longer had the innocence that mirrored the village they were sent to. And the funny thing is this: my mail was never even delivered to me; I collected it from a combination box at the Post Office. Doh, huh.

The note below, from Holland, is from 1981 or 1982. In addition to the letters I’d get for bicycle information (“Hey Richie, what seat angle do you use?”), and the ones from folks looking to learn the art of framebuilding, I also got many from people who just wanted a memento from the RS Worldwide Headquarters. I took the entire lot seriously and personally. And I saved them all.

I’ve received a lot of inquiries over the years. And I’d wager all but ten were answered. I know, because these very few made it into a small but slow growing to-do pile. The odd requests, ones for which I had to dig a bit deeper before I grabbed a pen and replied, went into a stack near the phone and just stayed there. And then time started passing, and then passed some more.

And yes, I did write back to René. 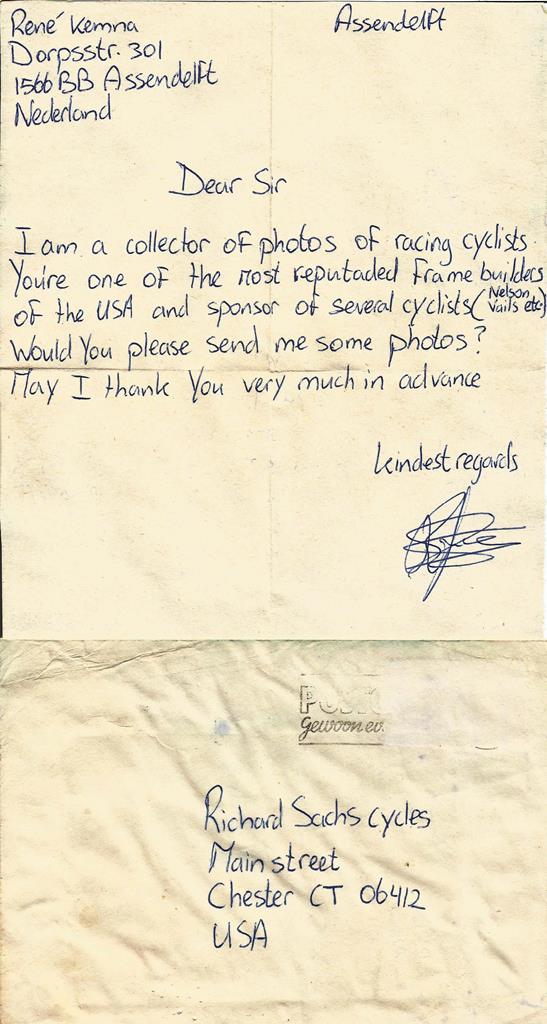