We’re here to make the most of the chances we’re given. The smart ones realize early how blessed they are, and build on it. There are others who’ve had the luck, the open doors, and options, yet are slower to realize how enabled they’ve been. The roads we travel are paved by fate, friends, family, mentors, and teachers. We’re the beneficiaries of those whose lives touch us as we grow. I’ve had luck at every turn.

The Dyslins, Nick and Lisa, are lifelong friends. They placed me on this path before we even met. In a 1972 letter from Ernie Witcomb telling me that I could come to London and work at his family shop, he mentions asking a Nick Dyslin about me and I was given a good reference. Odd, that. Though grateful for the opportunity, I wouldn’t meet anyone with that name for another 12 months.

After my time abroad, and while lingering in New Jersey waiting for whatever was next, I took the train to Connecticut for a job interview at Witcomb USA. Nick (who I’d finally meet) hired me. He and Lisa took me into their house and into their lives, and I stayed – and stayed for a very long time. It wouldn’t be untrue to say we’re from different generations, yet I felt both a peer as well as someone who was being guided by two genuinely loving people who’d take an interest in my life. The best explanation is that I simply can’t explain it. They were friends and they were family, and when I needed direction, they mentored and taught me too.

This picture, taken at the local track, is from 1974. Nick is simultaneously supporting me while encouraging me forward. It tells the whole story, end to end. The whole story.
. 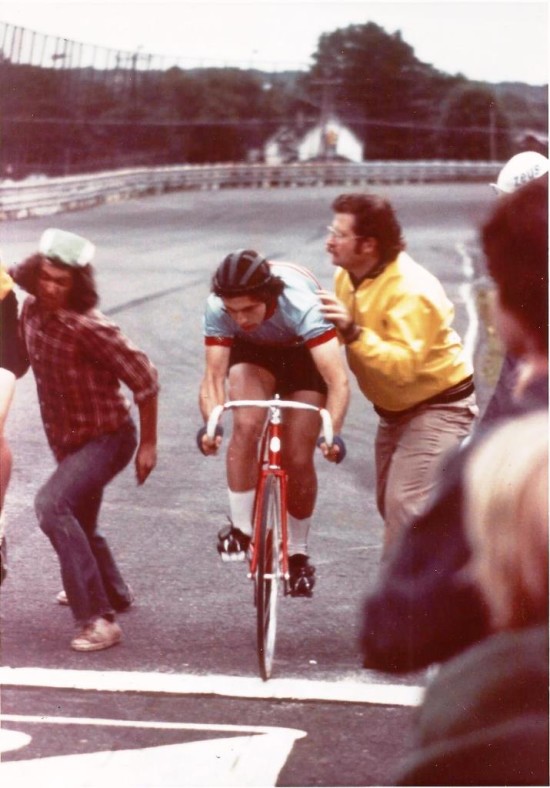