The Witcomb USA period is a little known part of my history. It was a division of Sports East, Inc. and owned by Ed Allen. The firm handled activity brands including Trak Skis, Allen-A Apparel, and Gerry Outdoor Equipment. I don’t know how the seed was planted, but Sports East liaised with the Witcomb family in London to sell their products in North America. In 1972 there was a certain intangible attached to handmade frames and esoteric components. The Brits would supply custom frames ordered by Ed’s staff on behalf of shop owners who represented retail clients across America.

There wasn’t any real profit or volume in made-to-order frames. For the deal to make sense, a line of Witcomb designed (sic) bicycles manufactured in Wales was created as the centerpiece. These were price point units that were made en masse (that’s French for a fucking boatload at a time), and an item that the company could build upon.

The London frames never arrived on time, or weren’t to spec. The containers of Welsh made units always sucked and most were discounted just to get rid of them. Ultimately Ed gave up – but not without a fight.

Peter (Weigle, who also was there) and I were directed to start making frames and filling orders. That’s a story in itself and one I’ll tell someday. But after two years, I also gave up. I began planning my departure. In the course of setting up accounts and readying for the just the right time to leave, my cover was blown – by a man with whom I shared initials no less. WTF huh? I would have preferred to broach the subject of quitting myself, but somehow Ed already knew.
. 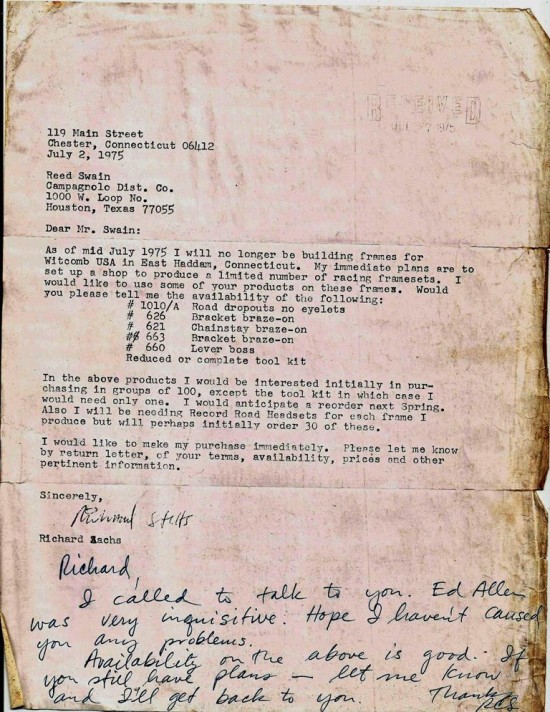