I had a very good relationship with the Witcomb family. Five weeks after arriving in London and living at a hostel in, of all places, High Street Kensington, Barry invited me to stay with him and Janet in Dartford. For the rest of my time in England, I’d make the morning cycle to Tanner’s Hill in Deptford where the shop was. It was right next door to W.H. Wellbeloved Butchers. The Wellbeloveds started their business in 1829 and it’s still there. Witcomb Lightweight Cycles isn’t.

When this first adventure ended, I returned to Bayonne, thought about starting at Goddard College (finally), but found a path to another adventure working at Witcomb USA, the company created to import and market Witcomb branded bicycles and products in North America. The people there worked hard to imprint the Witcomb name into the psyche of the American bicycle consumer. Ultimately, fate as well as some bad subcontracting abroad saw the wheels grind to a halt. I don’t remember the original plan working well much past the concept stage. A year in, it wasn’t working at all.

The principals, who began with hope, positive attitudes, and great ideas, started to take sides against one another. It wasn’t a cool situation for an innocent teenager to be in. I lacked the maturity to know who to align with, the folks I worked for, or the lovely family in England that looked after me a year earlier.

During the implosion, and with the agenda at Witcomb USA having become a moving target, I wrote to the Witcombs about coming back to Deptford. I wanted to have fun again. The opportunity was there. I soon realized that I could never recreate what I once had, and was resigned to rolling with whatever came next in Connecticut. 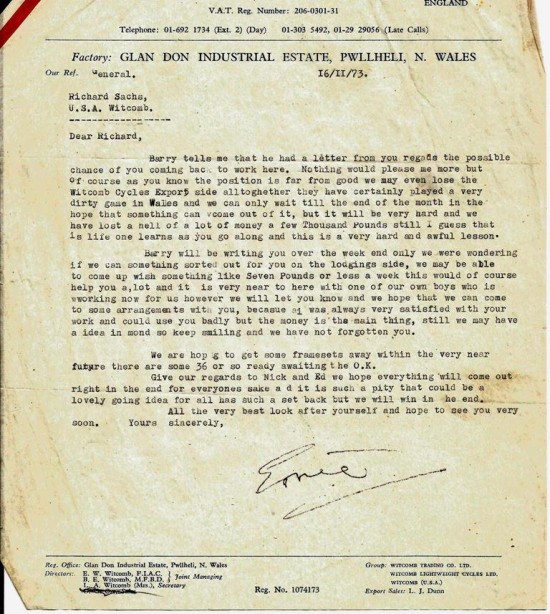