I think of myself as a home schooled framebuilder. Despite the time spent at Witcomb Cycles in London, I wasn’t there to ready myself for a trade. And when I worked at Witcomb USA, the business model had nothing to do with making frames in East Haddam. Well, eventually it had something to do with it. Ed Allen, the owner, was at wit’s end and unhitched himself from the British family whose name he took for his eponymous (I love that word – eponymous) North American agency.

Once Ed cut the ties, he mandated that Peter and I turn the basement into a shop. Neither of us had held a torch or done much metal work since we left Deptford. We did our best to channel the experiences and processes we remembered from more than a year before. And Ed threw all sorts of money at the project to help us figure it out and start producing.

We had inspiration and technical help from several toolmakers, boat builders, and craftspeople in town. Peter and I also did a very good job spending that blank check Ed was giving us. We soon figured it out. The Witcomb USA frame was born. Life was good. Until it wasn’t. Almost two years and several hundred frames later, it became a chore for me. The love for the unknown and unplanned went missing. It became a routine. I had to leave.

When I started my business, I was enthusiastic but unprepared. Making a frame was easy. Making frames wasn’t. I persevered, and never knew I could fail – maybe that’s why I didn’t. I had a built in following from the local racing community. More importantly, I had the support of a network of dealers I sold through. These were my guardian angels. 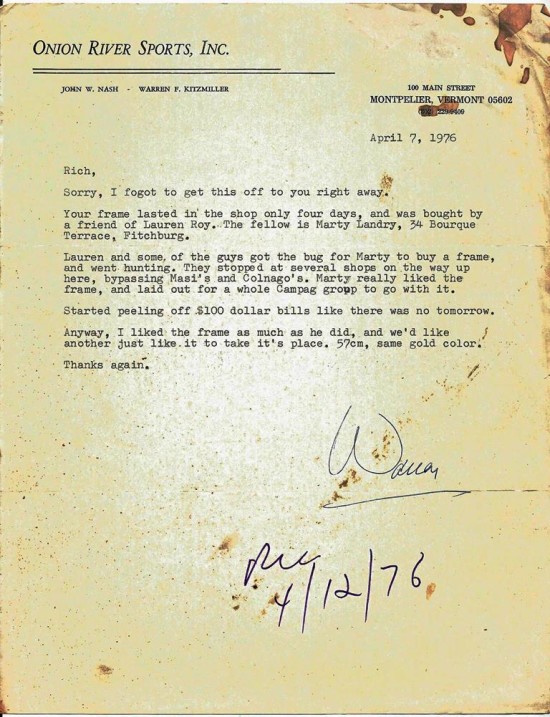