I learned some about business in the 1980s, running mine that is. I had already stood around for nearly a decade, watching the landscape change, seeing my heroes get old, or embrace the MTB thing, or simply vaporize in place. While it was happening, I sensed a decline in interest in the type of work I was finally comfortable making. I was in that no man’s land of having no Plan B, having not planned at all.

By 1982 that I added a second model to my menu, and called it the – caution, some supreme Varsity Team level nomenclature coming – the Richard Sachs Standard Frame and Fork. In essence, it was a dumbed down, all-holds-barred, no frills, generic version of my Signature Frame. Made by me, but using some second rate braze-ons, Guinticiclo frame parts, and a minimal of handwork, this unit was everything my best work was as long as you had your eyes closed.

The Standard was an option for anyone interested in my work, but who might have had, er – issues with price. I’m too far past it all to remember what the Signature sold for, but at $450 the Richard Sachs Standard Frame and Fork was a steal. And as my little world started its first ever spiral downturn through the pipes and into the Connecticut River, the only answer I could come up with was to put the fucker on sale for $430. I mean, the things ya’ do, huh.

For the RS cognoscenti (that’s Latin for stalkers) out there, the Standard was reissued in the late 1980s and called the Strada Immaculata, still the badass-est bicycle name ever according to a poll conducted by www.coolbicyclenames.com . 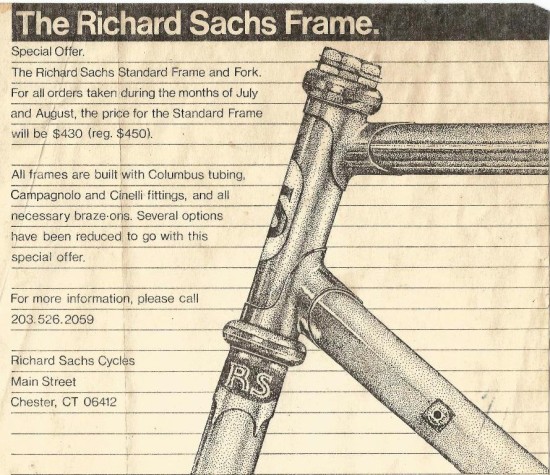