Pete Pearman was a rider on Len Preheim’s Toga team in the late 1970s. I supplied the bicycles. Pete sent this letter in 1978. It’s been lost, recovered, stashed between other letters, only to resurface dozens of times. I never forgot this one. Finding it again was a joy. Read the last sentence, “…or did you have a feeling and went by it?”

It ends with a question that’s telling because there’s a lot of analysis in framebuilding. It’s common for a learning maker to over-ask or over-examine, or to fret, or even fret about fretting. When you take a pile of stuff and transform it, there’s always an intangible; there’s that other dimension separate from the one you’re working within. In 2011 I wrote these words:

The organic nature of frame building has always confounded me. I’m more comfortable with it now than I was when I started. It often made me squirm as I tried to figure out the dance. No two are alike. Some parts of one can be so very right, while the rest of it is just good enough. Getting it nailed from end to end isn’t possible. I surrendered to that notion years ago. No matter what you bring to the table and no matter how hard you try, no two are alike. Duplication and repeatability are just dreams. Is it okay to articulate these differences and even celebrate them? Since I can’t seem to get to that elusive other side, I reckon it is.

When I made Pete’s frame I held everything under a microscope. I was rigid and so were my methods. They were mechanical. In 1978 I had many thoughts but no feelings. Many years later, that changed when I finally let go. 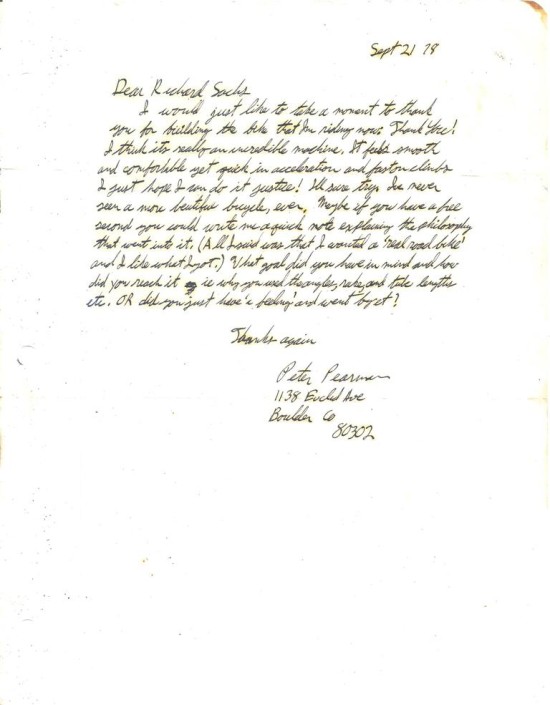