In 1979, I was the mechanic for the Shimano International Team men’s squad for the Red Zinger Bicycle Classic. Twice after that, I helped the women’s team when the event was renamed the Coors International Bicycle Classic. These were good times and memories still linger. The experiences gave me insights into group dynamics, pecking orders, and of course, keep equipment prepared for the daily grind. It’s all very different than just working on a bicycle for an eager client.

The original connection came through my pal, Jack Nash (RIP). We met in 1972 when he was working at Shaw’s Hike and Bike in Stowe and I was briefly at The Ski Rack in Burlington. Years later, he and Warren opened Onion River Sports, a Montpelier store that sold my frames. Jack and I raced with and against each for many years. It was he who tapped me for the Colorado trip. It wouldn’t be the first, or last, time he gifted me a golden opportunity.

Early on in my relationship with the Japanese firm, head engineer Keizo Shimano ordered one of my bicycles. It was odd because I was asked to supply components that, in my estimation, were the best available for touring use. It was a hodgepodge of Huret Duopar derailleurs, TA triple cranks, Campagnolo 1037A pedals, Mafac cantilevers, an Eclipse rack and bag system, Phil hubs laced to who-knows-what wheel products, an Ideale saddle, etcetera. A no-holds-barred ordeal. But why? Actually, I never asked.

A year later I found out that the bicycle was used for reasons other than to provide riding enjoyment for Mr. Shimano. His company wanted to make inroads into the burgeoning touring market here. The bicycle was the template for ideas and inspiration for the Deore group, introduced soon after. 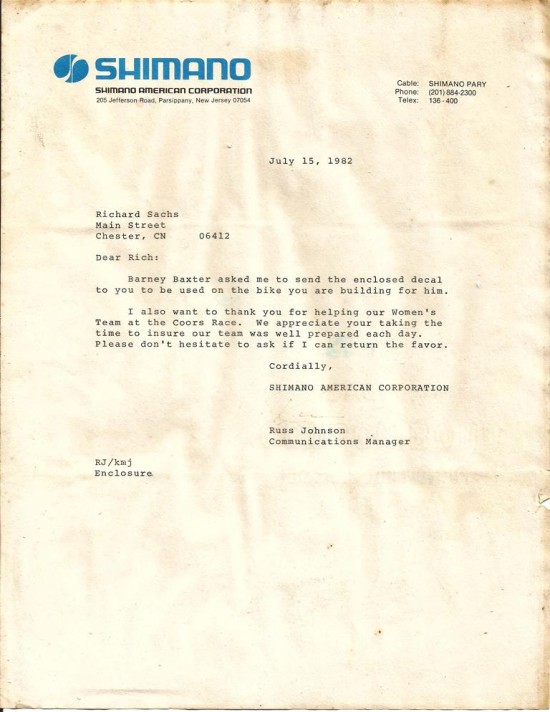