I’d be hard pressed to explain to anyone, myself included, why I read Town & Country each month. But I’ve taken the magazine for decades. The best I can do – if I reach – is that I’m shallow, and also like to see what people are wearing, not that I’d mine any fashion ideas. I wouldn’t. I don’t wear clothes as much as I put on a uniform each day. Enough said.

When an article about Robert Montgomery Scott appeared in 1990, with my black bicycle front and center in a sidebar along with a reference to Mr. Annenberg in the larger story, I wrote to Mr. Scott at the museum and let him know my connection to his friend. Until that time, I never assumed they were colleagues. As a Peddie School graduate, it was impossible not to know the name, Walter Annenburg.

My note to Philadelphia in turn begot one back to me from St. Davids. I told that story here maybe a week ago. I was cc-ed on the letter shown below. It’s an example, a mighty fine one by the way, of why I don’t begrudge the serendipitous route I took from Bayonne to Hightstown to Burlington to London and then to a bench in Chester where, many years later, I became a bicycle maker. 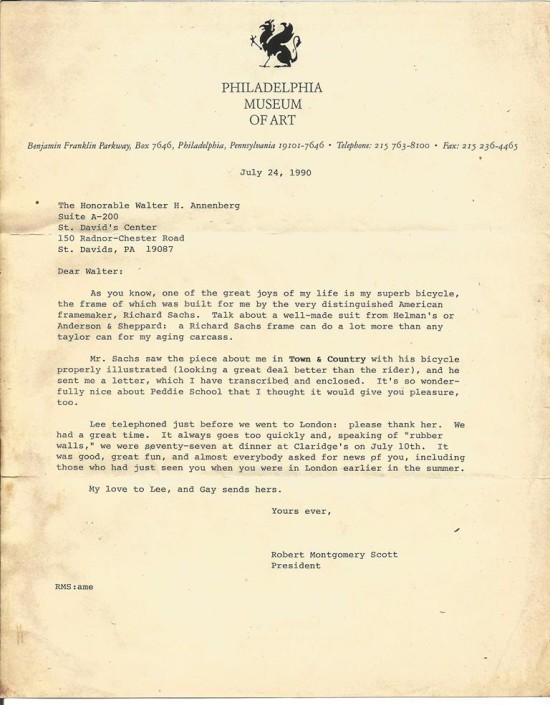