When I finally reconciled that I’d start a business and make bicycles, it was to fill my own needs. It was to hear my voice. And to see finished work as I imagined it. It wasn’t to make someone’s fantasy amalgam (that word, amalgam – that’s gold Jerry, gold) of fashionable frame angles, seat stay attachment possibilities, or endless lug curlicues. I won’t even mention colorways or stainless gewgaw adornments that double as bottle openers. In contrast to what some may have been doing, or others expected from an independent craftsman whose model basically was that the commission precedes its execution – in contrast to this, I was here to serve me. There was one way. Mine.

Over the years, conversations about custom versus bespoke versus made-to-order versus su misura versus Prêt-à-Porter have gone more circular than Domino’s Pizza menus left in mailboxes when they open a new store. I get the need/want thing. And that there are those who catch low hanging fruit by offering dozens of options in order to make a sale. Good for them. Really. I didn’t get that gene.

I had a picture in my mind from the day I first envisioned my name on a down tube. I’ve used a range of art supplies and tools trying to capture it. Sometimes it’s been a moving target, other times the result is a derivation of what I saw. But it’s always my picture. 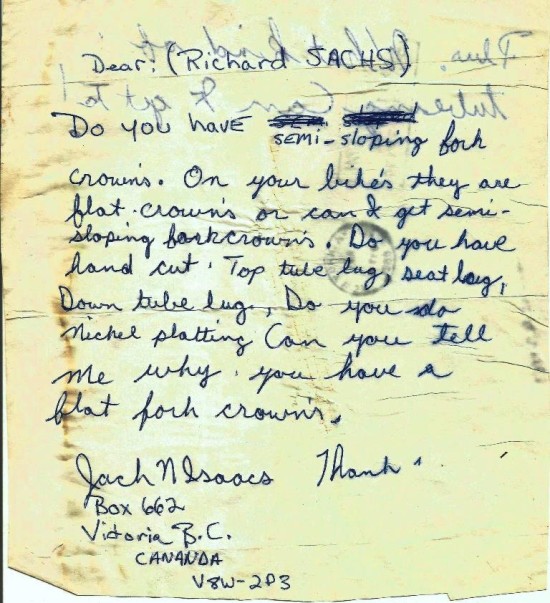