Galen Preheim (RIP) from Toga Bicycle Company opened a lot of doors for me. Toga, along with Lenny, Howie, and others on the staff, was my first dealer, selling Richard Sachs frames to the public as far back as 1975. There were some seasons that I’d fill forty orders alone for this Manhattan store when they were in Alphabet City. Lenny also helped create the first team and sponsorship program I had, and those were good years all around.

My alliance with Lenny put me in many conversations I normally wouldn’t know about. One example is a relationship he had with Alitta, a new clothing company in Soho created by Anita Greenberg. Or maybe it was Jacobson. I forget. Someone there had the concept to use the gritty city scene to brand the apparel. Alleyways. Rooftops. The urban landscape as a backdrop, rather than seamless paper, lights, and the typical studio accoutrements.

I had the good fortune to supply a bicycle to be used as a prop in one of Alitta’s print ads. This is 1985. I’d been in the trade thirteen years. They’d all been about learning, and racing, and selling. It was beyond exciting to tap into something wider than what had been part of my daily routine. This was a campaign that would reach the mainstream. And more eyeballs would land on a Richard Sachs bicycle.
. 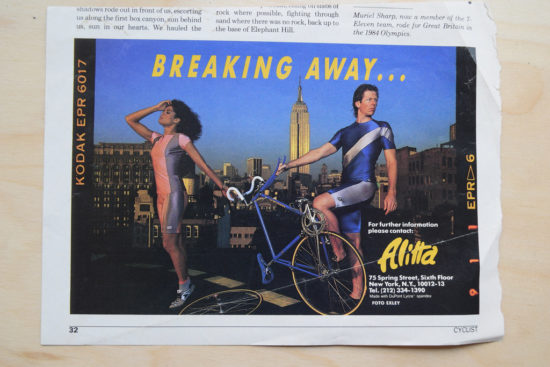