bicycles on the cover 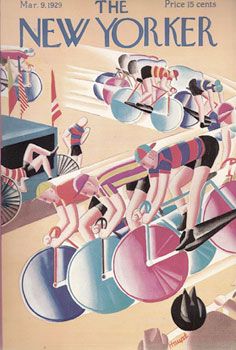 mrs washingmachinepost is a childminder, and those in her care range from kids of around one and a half up to nine years old. a bit like trying to teach a similar range of ages how to ride a bicycle, it is often necessary to occupy one set of kids, while paying a bit more attention attention to the others, before swapping allegiance. a finely balanced selection and one that she surpasses me at without too much trouble. an activity that is all but guaranteed to occupy more than just a few minutes is pen/pencil and paper, giving expression to those fertile imaginations. animals feature large in the subject matter, particularly horses for the girls, and usually cars for the boys, though i’ve noticed more than one or two trees entering the fray.

given that washingmachinepost cottage features more than a few hints that bicycles may be the mainstay of my world, every now and again a bicycle is drawn. yet considering the relative simplicity of the machine, compared to your average ferrari, while recognisable as bicycles, you wouldn’t want to ride one in the tour series. however, that double diamond frame and a couple of spoked wheels are as much an icon as that of the empire state building, a fortuitous comparison in the present circumstances.

wishing to create a humorous publication that would portray more sophistication than the corniness of its contemporaries, harold ross and his wife jane published the first weekly issue of the new yorker on february 21 1925. intended to occupy and target the literary sophisticate, the magazine slowly augmented its humorous touches, becoming a forum for more serious fiction and journalism. though the modern day new yorker continues in print, it has also embraced the interweb, allowing subscribers access to every back issue viewable in their original format. 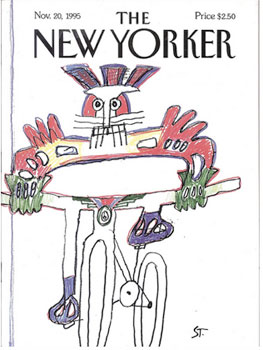 as with the majority of print publications, when viewed in their natural habitat, that of a rack in the newsagent nearest to hand, it’s the cover that advertises the magazine midst those deemed to be of similar ilk. unlike newspapers who tender for readership via block headlines and sensationalism, the new yorker has long employed the talents of some of recent history’s finest illustrators, most of whom have moved past the tendentious drawings of those in the care of mrs washingmachinepost, and featured the bicycle in all its various glories.

as a resident of a small rock on the edge of the atlantic, you may well be wondering how a non-sophisticate such as myself would be acquainted with the historical cover art of a publication such as the new yorker, given that the rock is distinctly on the wrong side of the atlantic? i could quote many examples of serendipity as it relates to thewashingmachinepost and selective articles contained therein, but my self-adopted counterpart in warwick, massachusetts has brought many an interesting yet obscure notion to the surface, that i might better edify both you and i.

“i first noticed bicycles on the cover of the new yorker in the early eighties. within a few months, a succession of other covers appeared. about a year later, i saw another one or two. it caught my interest, and i decided to see if there were others i might have missed. 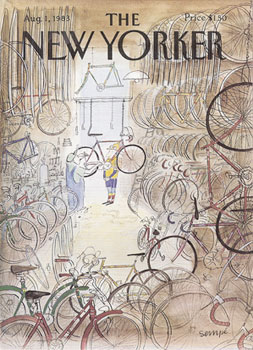 “back in the day, the publisher offered a fulfillment service that sold original covers, straight from the printers, none of which had ever been bound in a magazine. and, of course, they also sold fresh back issues.

“i proceeded to buy all of the available material(s), and also found ways to conduct my own research. as it happened, they had about 22 cover dates listed, and i found some that missed their radar. i made up my mind that i would collect them all, somehow.

“in the mid-nineties i purchased a book which listed all covers ever printed. i combed it profusely with loupes and magnifiers, and to my surprise, discovered that since 1928, a bicycle in one shape, or form has been in the cover art of the new yorker well over 100 times.”

having been a regular and sustained critic of the covers appearing on cycling weekly in the uk (and they haven’t improved any), it seems a surprising delight that a magazine with no apparent connection to the bicycle (you’re unlikely to read anything on larry’s preparation for, or contesting of, the tour de france), should have seen fit to depict the velocipede with greater reverence and insight than britain’s self-styled weekly bible on the subject. collecting things appears to be a characterful human trait; how many of us started with stamps, trading cards, shells, matchboxes and ended up with a garage or bikeshed full of bicycles? the intangible made concrete. 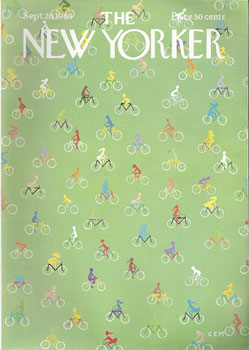 “it was my first ever truly ocd collecting habit. the best part is that, not only is my collection complete (with duplicates and multiples of many issues), i did all of this pre-internet. that’s a lotta research finding ‘zines going back to the 1930s atmo.”

this would be almost of academic interest to most of us, for even though i have appropriated one or two images by way of illustration for these particular black and yellow pixels, the full majesty of years of new yorker covers featuring bicycles would remain, to an extent, apocryphal. richard keeps all of these covers in archival bags, far from the reach of sunlight, and describes his collection as “the single most tangible item i have, and certainly more important than the new old stock seventies era campagnolo goods that live in the closet, too full to move around in.”

“and ps: all of mine are perfect – no subscription labels, folds, creases, mayonnaise stains…”

i am eternally grateful to richard sachs for sharing his enthusiasm and perspective on the bicycle with me, and ultimately, with you too.

The preceding article was originally posted on the washing machine post on saturday 5 june 2010.