Here’s a cool one. It’s picture I took of a 4 X 5 transparency held up to the sky. That’s my thumb print on the lower left.

This is a 1998 shot of a bicycle I made for Bruno, the photographer. It’s all Campagnolo Record or whatever the top of the line group was called in the day, and with a host of components chosen to complement the Italian parts. Columbus tubing. The lugs I designed for Bridgestone that, years later, became the lugs I designed for Rivendell that, when I used them on my own bicycles were further elaborated from the original shapes. JB used some Dupont ChromaLusion paint that was popular then. It had this quality that, depending on your line of sight, the hue would change slightly.

This bicycle – it was a very nice one. The color wasn’t my choice, it was the client’s. We were all happy with the result. And the studio shot was and is excellent. It may not be evident from the post, but the top tube was set up to follow the horizon and all else fell into place. I was interested in the side view because it tells the most complete story in one view, but I was bored with the from-the-drive-side mug shots that so many use for their calling cards.
. 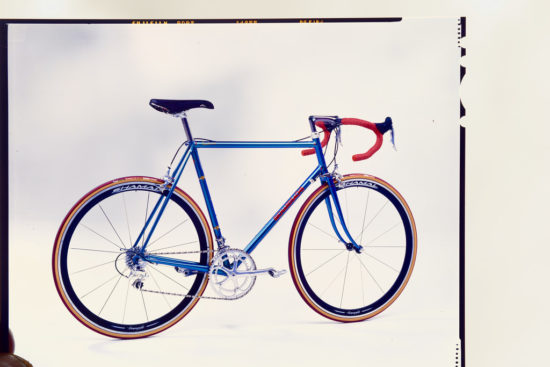