In 1979 I wrote 1,289 words about my trade for Competitive Cycling, the ‘zine based in Nevada City that also, in its day, was the thorn in Cycle-News’ side. Cycle-News was once Northeast Bicycle News, and then VeloNews, and then Velo. I’m seriously glad I’m not in publishing.

I began with, “In 1975, the number of American framebuilders amounted to nearly 100. Today, there may be less than 20 still involved on a full-time basis. These, however, are building a reputation that is equaling, if not exceeding, the European masters.”

This was a sincere perspective gleaned from almost a decade of bench work. Revisionist history and selective memories aside, the landscape was barren. Even the “European masters” were already falling, leaving brands to their mostly disinterested children, or – worse yet, diversifying into that newfangled thing, the mountain bike.

Water seeks its own level, markets self-correct, and people make it to the other side. We’re now in a time when more people than ever are making frames. I can’t know if it’s a business for most, or if they’re opening up veins for this era’s craft du jour. We’ll come back in 38 years and take stock.

The text ends with an opinion, disproving the myth that these are a new thing for me:

“This framebuilder’s opinion—the dominant frame won’t be American; it won’t ever be made in one particular country. Deep down we all know the complete bicycle is only as efficient as the legs that pedal it. But we have finally ‘gained the confidence’ of the public to which we offer our products. While the European framebuilders, so popular during the bike boom, have been slow to cater to the discerning need of the American bikie, we have filled the void. We offer quality. We offer beauty. We offer precision. We offer service. The American framebuilder has finally come of age.”
. 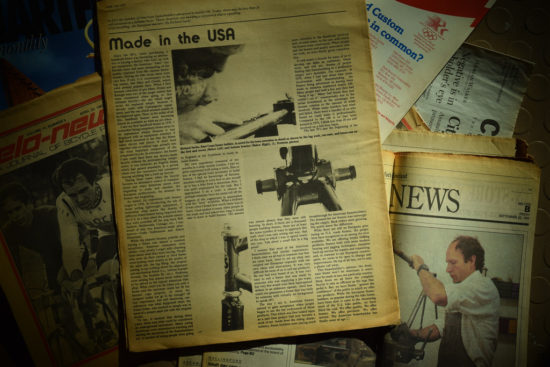