I walked into Bruno’s studio in the late 1990s, hoping to begin a relationship. He was a top tier studio photographer with an emphasis on classic cars, My pal Rick from Guilford put us in touch. Bruno also liked and rode bicycles so I felt comfortable that my needs for product shots could be easily understood. It’s no small task trying to convey your own vision for what you do to others whose task includes tapping their vision to make it work. There’s often that icky line where you have to accept that what you want will come out differently. The light hitting paint a certain way. The handlebars turned a degree from where you wanted them. The rotation of the cranks. Shit like that. Over time, I learned, no – I accepted – that these are collaborations and the image is almost more the shooter’s than mine. A successful join is when you like his versions even better than what you came in hoping for. With Bruno, I always did.

But the point here is this – when I did walk in that first time, he says, “I know you.” Turns out Bruno shot this picture of me almost 20 years earlier for Union Trust. I had to be reminded it even existed, and that his capture made it onto the cover of the bank’s in house magazine.

For the detail vampires, the location is the Giro de New London, a criterium that seemingly ran forever in Connecticut. I’m wearing Puma shoes, a pair of Moa 80/20 shorts, and that lovely Belgian track jersey I still had from when I lived in London in 1972. It was blue with slim red stripes. Brancale helmet, I think. Super Record Campagnolo. Cinelli VIP ‘bars, stem, and saddle. No index shifting. Back then, your hands and fingers were indexed and you knew intuitively how to shift, and when. Cool was about to end in the next few seasons.
. 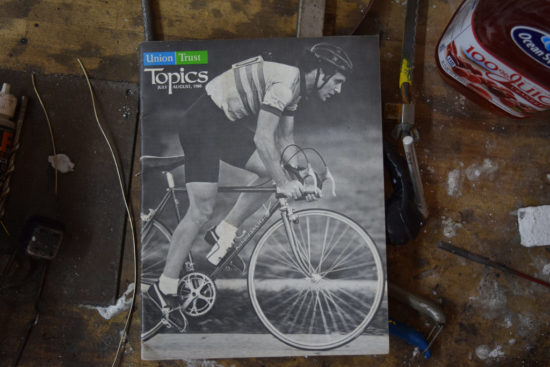