Some of mine, What I like about them, what I miss, is the simplicity, the trust. The paper, ink, and text tell a complete story. How to find me. For the 38 years I lived in town, as long as my name was on the outside of something I’d get it. Didn’t need door numbers or streets. Mail arrived with nothing more than Richard Sachs and the zip code. The guys behind the counter knew, and all of it got dumped in Box 194. The combination was G and then C and then in the middle of the I and J.

I don’t think the system accepts so little information anymore. It’s gotta be formatted for the machine or whatever technology replaced the thinking. It probably wasn’t even thinking when Bib, Carm, Enza or the others grabbed an envelope and routed it. It was muscle memory. Or maybe just knowing all of us and never looking below the first line. Weird thing is there aren’t more people now, just different people. And they won’t know you like back then because the future happened.

We left the village in 2009 and recently came back to a place so near but also a world away. I haven’t had business cards since 1983. Or stationery for that matter. I’ll be tossing a hat back in that ring soon. A pal who works at Crane & Co. sent a samples kit. I’m ready to go back in time. The Slow Food movement but for bicycles.
. 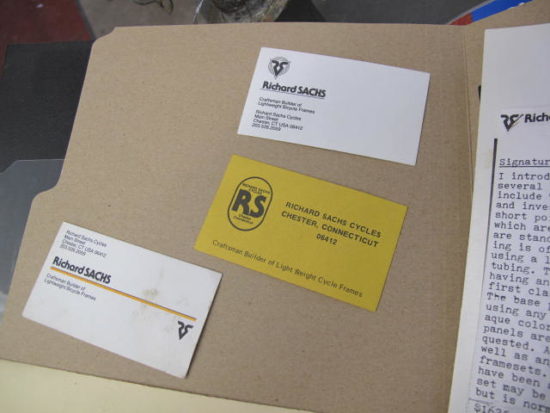