Do What You Are

I am an ISFP. That’s code for Introverted Sensing Feeling Perceiving. I only know this because I was interviewed for a book about personality types. The premise was that the more intimately you understand how you’re hard-wired, the easier it could be to walk down an occupational path that suits you. Before 1991, I never heard the words personality and type in the same sentence. And, had I been asked about Briggs-Myers, visions of small engines, or of the pharmaceutical giant, might have surfaced. And then the book came out.

When I received my copy, I wondered about it for a while. In the first few moments reading about myself, I contrasted the experience with how easily the contents of a fortune cookie can be taken to heart. Did I believe the words simply because they were there, in a chapter devoted to deconstructing and explaining me? I had to trust that the authors turned over every rock before branding me, and including me in the final edit.

By 1992, I had spent two decades in the trade and was already jaded bored with how the industry covered itself. Road tests seemed stupid. Qualifiers such as stiff, resilient, and nimble never made sense to me, and were already past their use-by date. So when Do What You Are was published, I was flattered to be included in something with more depth, and in a medium that would have wider reach than a bimonthly bicycle magazine.

But what about personality types and ISFPs – it’s been more than twenty years since the Tiegers wrote the first edition. Have I changed? Would their current sleuth work slot me in the same grid I landed in when they first published? I’ve become comfortable with my ISFPness and often consider it when forming opinions. It helps me defend them when I’m right, and gives me something to hide behind when I’m wrong.

I had a job before this book came out. According to my opinion, framebuilding is not only my trade, it’s also my antidote to mediocrity. I left industry to focus on something singular and personal. Even with my personality type and some good fortune , it’s taken a lifetime to make sense of it. I hope Chapter 23 helps some readers find an easier path, even if it doesn’t resemble the one I took. 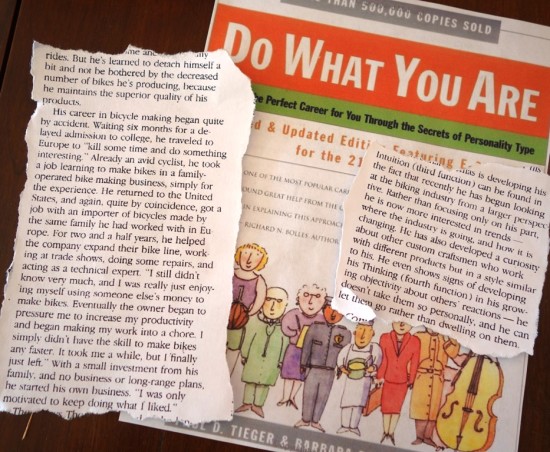