Another look at what distracts me. These paper cuts were in the trove of RS archives that came home last month, much of which I hadn’t seen or touched in many years. Decades, in some cases. During the middle 1990s I got itchy for change and spent as much energy doodling as I did brazing. Kinda’. The RS logo, conceived in 1981 and then attached to the bicycles a bit more than a year later needed something. I was looking for it nights and weekends, and even during some days when I should have been filling orders.

The stylized marque was varsity team material right out of the gate. Unadulterated, I loved it. When applied to surfaces and over paint colors chosen by the client, the logo had various borders, scales, shadows, and reliefs added to it so that a single version would work with most everything. In 1982 I settled on the black RS trapped in a white triangle with a red and yellow halo around all of it. That version lasted until 1996 or so. Then the doodling began.

I wanted to deconstruct all of it so that only the logo was applied, and have no artsy devices cluttering it up. These here are some renderings, most variations on the same two or three themes. I couldn’t get to where I wanted, but eventually got close by Y2K. Little by little. One element removed at a time.

Nothing shown here made the light of day. Nor did piles of examples like them. But it was fun being distracted. The further I threw myself into trying to reinvent this aspect of my product, the less productive I became. The interest I took in the look of my bicycles, while there from the start, began to consume me after the first twenty years at the bench had passed. I was making fewer units than I was capable of, yet more satisfied than a maker has a right to be. It took a while, many years in fact, to realize that my life and interests away from the bench can enhance all that’s made when I stand at it.
. 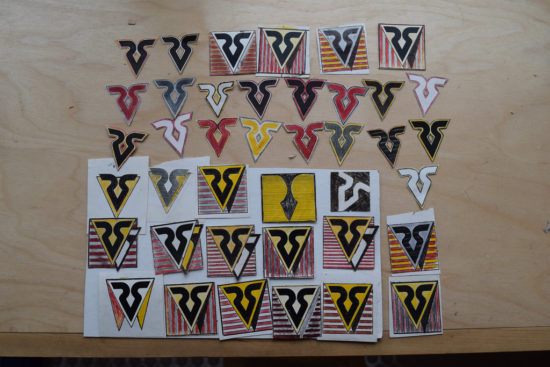