I’ve met very few cameras I didn’t like. But it’s not as easy as just smiling, or standing naturally. For the studio days I usually worked the Gillette hard for a close shave. Made sure the shop apron was washed but still had a few small tears to suggest I work once in a while. I almost always did the black turtleneck and jeans thing, and almost always the Adilettes. Depending on the era, I’d go to great (well, maybe good…) lengths have the wristwatch visible. The bicycle was at the right stance to the lens. I didn’t want to force the pose, or be too rigid. It was common for the shooter to run off hundreds of exposures just to capture several we might use. Some were handed off as four by fives. These are two and a quarter squares. I spent an inordinate amount of time looking through loupes over light boxes. None of this stuff was digital. None ever converted for web use. I’ve done it that way too. I’m comfortable letting it all get fixed in the machine because these are different times. But there’s also something memorable, almost organic, about film and how pictures were composed and taken, and that waiting period between when the lights get turned off and the transparencies come back from the lab. And then making so many decisions until the right one is made and an image is chosen.

Living with anticipation – it’s a feeling I could get used to again.
. 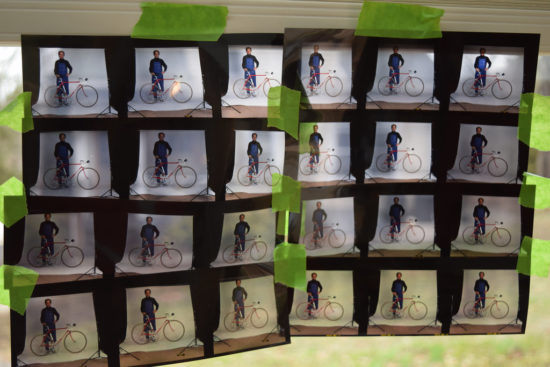