It starts today, the 22nd of November 2016. My first full and real day of work at the new studio. The load-in began in October but it took some time to get a floor plan I liked, put product and material away so I won’t have see it until needed, and wait for the building inspector to say all was well. Well, all is really very well according to my opinion.

After some nine hours I’m half way through a frame and my goal is to have it done by Friday, this being a short week. For the first time since the early 1990s, I’ll serial number these bad boys because starting over is what this is all about. While my frames have always been marked, the number system I used went sideways during the first Bush presidency. Now, as we face the prospect of another bush administration, I’m ready to record again*. For obvious reasons, the numbers will start at DR1, DR2, DR3, etcetera and continue until I’m done.

Though the early hours in the morning felt strange owing to new acoustics, a different footprint, and my getting used to the bright light from the bay windows, the flow was good. I may have waited five months for this structure to accept me, but it has in spades. My tools and I remember each other the way love-struck teenagers do in school each September after the summer holiday. Giddiness abounds. Right now and for as long as my fantasy permits, I’m just an excitable boy.

* (Also read Why I Left The Recording Industry.)
. 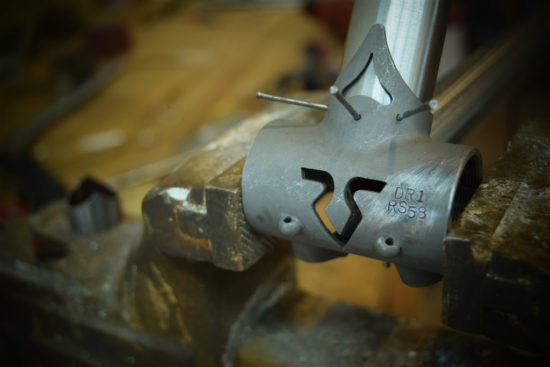