“How does anyone really know if one fixture is more precise than the other?”

A fixture ensures that the pipes in it will mimic whatever the design parameters for the device are. You have to work in tandem with it. Forced pipes or interference fits will add major wonk. And even if all mating corners play nicely with each other when assembled and locked down, the heat, one’s skill set, and fate all are part of the equation. I think it’s impossible to make a straight frame in a fixture, and it’s why I pin all joints and/or slightly tack one or two before brazing the frame free hand. But before I do, the pinned/tack assembly is inspected on my alignment table using set-up checks and light tools. The fixture ensures the frame design is what you planned for, and the table allows you to take that and verify end to end linearity.

“How does one know if the expensive fixture is doing a better job than the inexpensive one in terms of holding the tubes in plane, or in the desired geometric relationship.”

The worker does the job, not the fixture. Why so many noobs spend so much cash without having a sense, tactile or otherwise, or understand the nuances that are present when brazing temperature, material, and the human condition interplay – it’s beyond me. But that’s the world we live in now, and the landscape you’re noticing by asking the question. People throw money at tooling and think it’ll give them a fighting chance at getting closer to zero (as a measurement) or perfection (as an ideal). The only way this happens is by doing a lot of work, over and over again. And then repeating it.

“So it’s possible that a less expensive jig is as good as or better than a more expensive one? Nobody can be certain.” 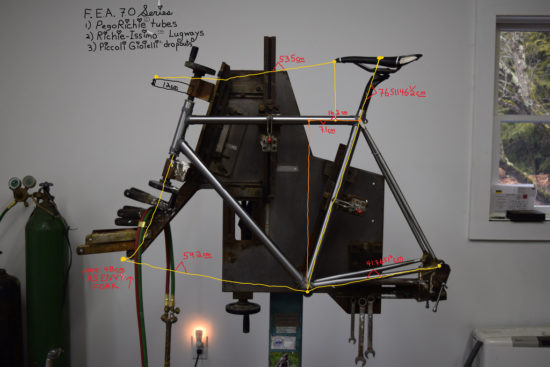