I Love A Man

I love a man atmo. The image attached shows the work of pal Creighton, a man I met some eight years ago at the NAHBS in San Jose, and a man with whom I have shared an intimate and nurturing cross-country electronic relationship with. In addition to being one of the most versatile and demanding (of himself) craftsmen I have ever (as in EVER) met, he is also the consummate tool and die/machinist guy who conceived and produces the metal RS logos that I add to my head tubes. Creighton took my RS art file, translated into a workable program, found a way to fabricate the little pieces so they are each an exact (as in and EXACT) replica of the art, and also manufactured a tool with which to perfectly (as in PERFECTLY) curve and shape the little kittens so they conform to my head tubes.

Another batch of 300 (actually, 299 – but that’s why they pay us the big bucks…) are en route (that’s French for in the route) from the Midwest to me as I type this. My hat’s off to C.N. right now and I lift my glass of malbec and toast him, his talent, his uncompromising ability, and above all – his friendship. 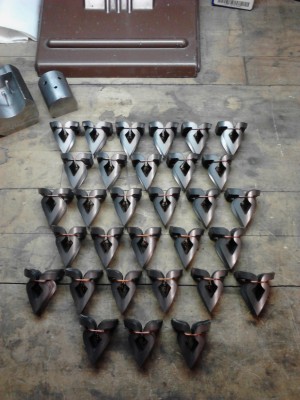