Some 14 days ago I got this tool, the newest in my quiver in a while, and wanted to immediately transition over. It’s simple, but not easy. All tools have their own life. They work with you, you work with them. Frame making isn’t Lego despite what’s shown at the craft fairs and on some blog sites. There’s a way, a developed way. And you have to think of every wrench you hold, and every clamp you clamp, and every block you place something in, and every single piece of material you want to someday be a bicycle, and you have to respect every single step. The tool doesn’t do the work. Often it doesn’t even make the work easier or even better. But for anyone who makes things, a new tool is a chance to get closer. If not closer, then at least a chance to feel better about the trying.

Last week ending yesterday, Saturday at 2PM so I could finally get the fuck out of here and ride my bicycle again, last week I started and finished 14 forks. Well I didn’t finish them yet because I still have to turn down the crown races and mill the slot on the side of each crown. But I did make a pile of these with the sole intent of getting to know the new tool.

Lemme tell you this, the old tool loves the new tool. And it made the ride that much better.

That was the week that was.
. 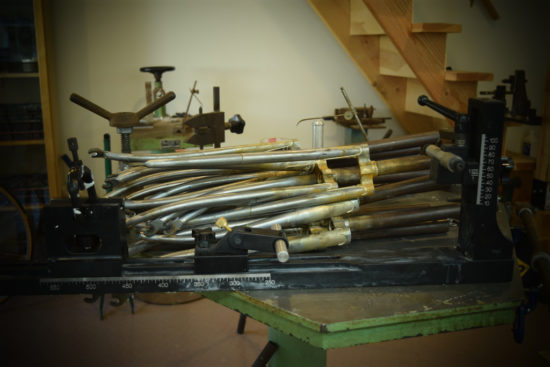