Here’s one from 1982 taken by Ken – the guy whose name I can’t seem to summon up – with the studio on Union Square above The Underground. This 4 X 5 transparency shows a 54cm road frame painted in a dark gray hue with contrasting paint panels in champagne (the color not the drink from France). I was influenced by the Spanish Kas team bicycles from the 1970s and wanted some of that on some of what I was doing. Columbus tubing. Nervex Ref 32 lugs. Campagnolo parts. Someone asked about the frames being shown with components. I did that because it was how they were spec-ed and sold. Back then, the small amount of extra money I could get by installing some hardware wasn’t that small. Always thinkin’. Always thinkin’.
. 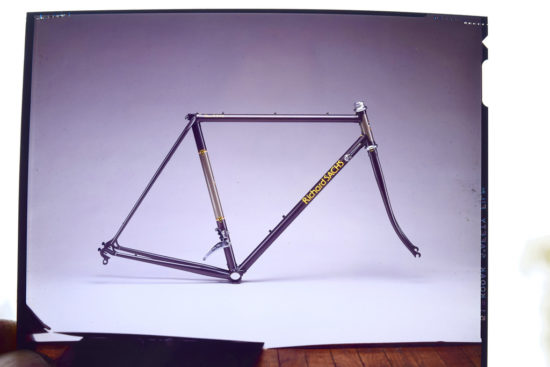