In 1979 I went to Italy with pal Len Preheim (RIP) for a 20 day trip that centered around the Milan Show. While there we drove to every frame maker of renown. We had either invitations or letters of introduction for each brand. We went nowhere unannounced. It was a dialed itinerary.

For me, this was Ground Zero. I came up in an era when the Italians drove the bus. Their place in the trade’s pecking order had no equal. I spent almost a decade fantasizing about who these people were, what the men looked like, and how work was done on the shop floor.

The notion I had, that of a European version of me, but older, more experienced, and with the wisdom that comes from being in a self-sustaining culture was challenged from the first meeting. These were not people who viewed bicycle making as a craft or one of the decorative arts. I met none who could fathom making one frame at a time for one client.

The travel was enlightening. I returned to Italy often. I was looking for something that didn’t exist. And each time came back to my own space resolved to make it work. After that first trip, I brought together a shooter, a graphic designer, and played wordsmith. I spent a small fortune printing my first four color brochure telling anyone who was interested exactly who I was and what I did.

My many sojourns abroad pushed me to switch gears and look my job less as part of the creative process, less a part of the food chain that offered chichi bespoke luxury goods to the cognoscenti and the rich, and more a maker of things, of tools for the sport, and a supplier of well-designed machines for those seeking them.
. 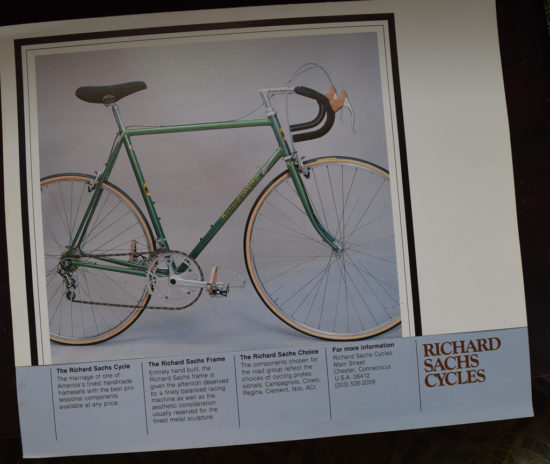