I am devoted to my suppliers, friends, clients, and to the framebuilding niche. The alliances and allegiances we have are what made us, and what makes much of life enjoyable and business profitable. This is a story about my day and how I wasted over half of it obsessing over a single detail that may not even matter. Since it made me second guess my devotion, it obviously mattered to me.

The North American Handmade Bicycle Show is a held each winter and it needs no introduction. I am a zealot for NAHBS, one of its biggest fans, and – at times – its biggest critic. I’ve been pals with its founder, Don Walker, since before the show was even conceived, and the conversations that led to that first iteration in Houston some eight years ago seem like they happened yesterday. But this isn’t about the show. It’s about the ordeal that is part of the preparation for the show.

In the framebuilding trade, NAHBS has become the go-to place to be once a year in order to present your work, have face time with peers, and also promote your brand. If all of this works as planned, the niche, too, is promoted in spades. To this end, many component makers know that aligning with a NAHBS exhibitor is a good way to have their goods seen on the finest hand made bicycles in the world. All of us who attend receive special offers all autumn and early winter from the many who make the parts that turn our frames into assembled units.

This past November one of my suppliers made us an offer for the 2012 NAHBS in Sacramento. If we used the appointed distributor, we could buy components at a very, very low price in anticipation of showing our bicycles dressed in them the following March. Nothing at all wrong with that atmo. I looked over the menu, committed to an order, and sent it in.

Last week I was wondering about the status since February was days away, and I was notified that the parts would sail before mid month. Hmmm. That’s not great because, despite the prices being mighty fine, receiving them that late throws off other deadlines I have that involve using shippers and handlers at special rates they offer for the show. If the first deal is late, it costs exponentially more to ship and store the bicycles after the 15th. Oh well. Any monies saved to rob Peter are now used to pay Paul. Or some shit like that.

Now here’s the rub. Yesterday, press releases went viral through key websites and blogs mentioning the new and improved components that were under review and would be available in less than four weeks. After reading these and the message board noise about the updated parts, I emailed my inside salesman to ascertain that we will be receiving will be the same 2012 goods that are being so heavily talked about now. Bad news. No such luck. The deal we cut – the offer we were given in November – will net us a parcel of 2011 parts. Man, how much does that suck, huh?

I stewed on this for a while. I dissected the scenario that now included me showing up at NAHBS with bicycles I THOUGHT would be up-to-date and up-to-spec but clearly would be missing marks owing to that the newer iterations were off the drawing board and already being shipped. Who could I share this angst with? Who could I lay a virtual bitch-slap upon so that I could feel better even if I couldn’t do a damn thing about this?! At my core, I felt insulted that a company that I liked, supported, invested in, and whose parts I used religiously, could be part of this ordeal. I don’t want to start a selling season at the industry’s Blue Riband event and have my bicycles adorned with old inventory. And I don’t love that pictures of them being representative of 2012 will circulate all year if the parts are from 2011. That’s just how I am wired.

After some introspection I decided the best way to resolve this was to tell my supplier how I felt. I wrote an email that contained the following words:

I think it’s a mistake to have new product launched but not available to us at NAHBS. We are all there showing and selling the best bicycles we can possibly design and make. In hindsight, to even offer a special price for NAHBS use only and then have newer versions of said parts propped in the media before any of us even have the NAHBS parts is somewhat deflating to our collective egos. Most folks at NAHBS may not care, or even have the nerve to have this conversation. And I am not having it on their behalf either. I’m only reiterating that the show is important and on the calendar a year in advance. The framebuilders are folks you need badly to be in your corner, and for offers to us going forward, I think better planning for model year intros should be considered. For us to be at the most important weekend of our year showing bicycles with “old inventory” is not a good thing. .

Because I work alone at what could be considered an unconventional job, it’s not uncommon to get sidetracked with the mini-dramas that find me. I would have been happy going to NAHBS as planned, and showing the bicycles I made well in advance of the three day weekend. But I lost focus today and spent an inordinate amount of time examining and stewing over the aforementioned issue. There’s no right or wrong here, and not that much revolves around my bicycles, the parts in question, or even the show. But I still feel jilted that there’s the loop, and there’s us outside of it. In my perfect world – the one I would control – if the arrival of something new-and-improved coincides so closely with the show I was offered special deals for so that I could have the brand, the parts, and the killer price, too – in my perfect world, I’d be going to California with the new stuff not the old stuff.

If you’re in Sacramento at month’s end, come to NAHBS and stop at booths 508 and 510. Unless some miracle happens, I’ll be the one with the 2011 parts on my bicycles, just like so many of my peers around the convention center floor. 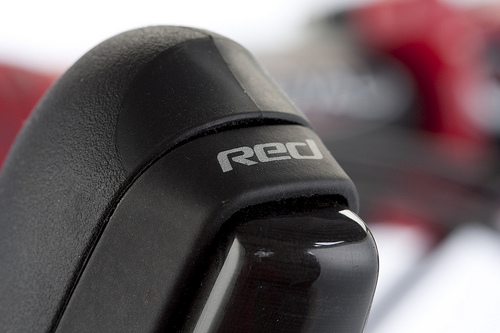