This is an example of one of my 20th Anniversary frames made in 1992 and 1993. Twenty offered, all numbered sequentially. The idea came from Willam Turnage, a client who owned three RS bicycles over time and whose acquaintance I made one Earth Day weekend a year or two before this frame was made. It’s not his, but he had one like it in his size. Mr. Turnage was a past president of The Wilderness Society and also the business manager of Ansel Adams. More importantly, he was a well-heeled and very knowledgeable consumer of finely made goods be they timepieces, footwear, photographic equipment, bespoke shotguns – you get the picture. After his first order arrived, Mr. Turnage encouraged me to create a limited edition frameset to commemorate my being in the trade for two decades. We spent many months on the idea and I benefitted immensely from it and even more from the friendship that his commissions began with.

Michael Furman from Philadelphia shot the image and I took this picture of it fifteen minutes ago. My thumb is at the lower left, and there may be some lip marks on the upper right because I had to adjust the camera and didn’t want to lay the transparency on the ground while doing it.
. 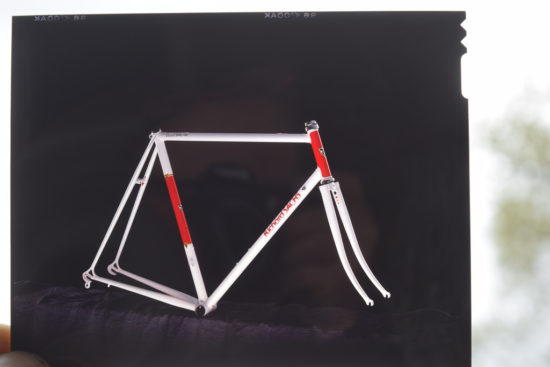