This is full page ad I used to take, sometimes even in periodicals having nothing at all to do with bicycles. The message I wanted to send was this: I am not them. The figurine. The word count. The pith. It’s all there. It was straight out of the Richard Sachs Cycles style manual.

I realized early on there was a go/no go thing between me and the trade. My decision to stay at the bench was equal parts embracing the unconventional path, as well as feeling as I’d severed ties with academic life for good. The more firmly I became entrenched in a craftsman’s life, the easier it was to accept that I found a corner to stand on – and should protect it.

My personal space demanded vigilance because it was oh so easy to get sucked into the mainstream. I needed the industry on many levels, especially if components are considered. Without them, my frames would never become bicycles. But I could identify with no one, and none of it. Yet I casually drove myself ahead, made more frames, found clients, and became part of the fabric on my own terms.

I developed an irreverent streak – maybe to make claim that I am not part of anyone’s game – maybe to tap a creative streak that needed to surface and help me tell a story – but most definitely as a survival instinct. The more things stayed the same, the more I needed to amplify my differences.

The model was painted using a fine point Sharpie. The little guy sat in my window for generations. The bicycle broke into many small pieces not too long ago, a fate each of us will meet one day. 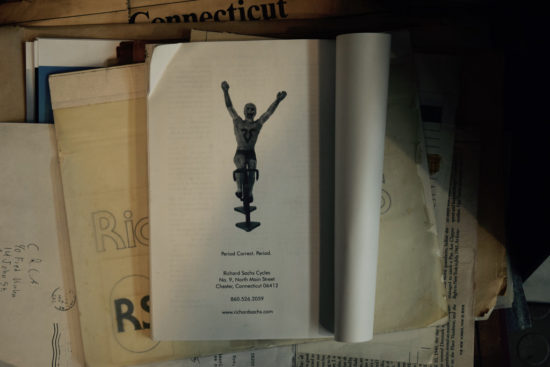