Nearly every commission I filled during my first two decades at the bench was for the trade rather than for a retail client. I started commercial life as a maker for shops I had agreements with and they, in turn, took orders on my behalf. I’d get forms telling me what to do, and a color, and it went into the pile. It was so much easier making lots of frames, all the time, and with no distractions. Have you ever seen the BBC comedy, Are You Being Served? I served the information. That all changed after the 1990s.

Folks who ordered these bicycles from places and people far from my front door never knocked on it. But I’d regularly hear from them after the fact. Many letters came. I read all of them. Saved and replied to almost every one. I was newer. Younger. The words on the paper made me feel validated. The shop owners paid me. Their customers paid me in kindness.

Those early years were full of correspondence. The exchanges were like a master class in how to close the circle. Just as each frame has a pile of material, a design, and a set of boundaries that all has to fall within, the same is true for relationships, particularly those involving Su Misura. Developing a vocabulary, the right body English, and a delivery system – these became part of the job.

My role evolved from the person not only selecting and joining the metal, and then further decorating it, to that of the sales clerk explaining the process and its virtues, just as if I were a cast member in the aforementioned television series based in a London department store.
. 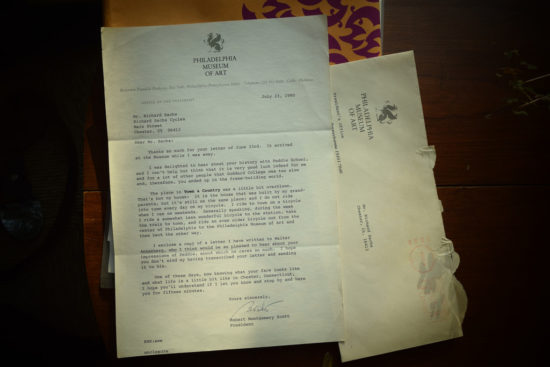 « Just Keep Walking
Could Be Us »