Every so often I’ll adopt a cause. It’ll consume me, and I can’t let it go until I find a way to add my voice. I have a soft spot for the marginalized and underrepresented. In another place and time, I could see myself in the labor movement, or finding a way to be Mario Savio before he was. I love that stuff. More importantly, it fills a need.

When I do get sucked in, I become indignant and proactive. I’ll wring out my opinions, try to affect some change, see where it goes, and then move on. I’ve spent years lamenting the quality of materials we framebuilders have to ply our trade with. I’ve been pissed about the shape of handlebars available to me. I’ve even been vocal about the parking situations at ‘cross races.

Rarely do I have more than one drama on my plate at one time. This week there are two. The annual news coverage about Black Friday is one. Online posting decorum is another.

As much as I’d like to ignore it, I can’t wake up after Thanksgiving and not read about shopping as a contact sport. I understand consumption. I even like a sale. What I don’t get is how someone turns into an entitled miscreant who lacks the self-control to play well with others sharing the same personal retail space. It disgusts me to think that these people 1) vote, and 2) would trample others for crap made abroad in factories that took the very jobs once held by those hyperventilating in Aisle 7. Heck, I’m not even that political. But something is very wrong here atmo.

This week I served up some supreme disdain for the type of person who pins on a number, goes to the mall at 4:30AM on Friday, and who can’t avoid a fracas. My words somehow landed over the net in a space occupied by someone with a screen name. The concept of replying anonymously is one I tolerate at best, but have no use for in real conversation. You want to discuss something? Sign your name!

Life is fragile and impersonal enough without folks fighting over a flat screen, or hiding behind one. 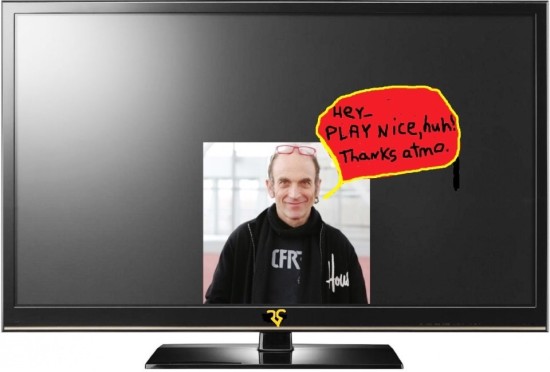