Space is always on my mind. Well, most of the time. My own space is what I know inside out, and backwards – and I’m completely comfortable in it. It’s something I am both an expert in as well as preoccupied with. I don’t remember ever feeling differently. Some folks spend a lifetime making rules, drawing and then moving lines, trying to define their space. Mine arrived with me already in it, and I have never thought to change a thing.

I spent the better part of today thinking about my space. At some point, I was reminded that a teacher I had at The Peddie School died three years ago. Some Facebook posts were exchanged. Memories were summoned up. And for an afternoon, give or take a few minutes, I was connecting with fellow alums and chatting about Mr. Von Schwerdtner and the space he occupied in our lives. Funny – for some in the conversation, the words offered seemed decidedly school era specific. I looked at the bigger picture and considered the subject (Mr. Von) was one that we live with daily – as in, now – and isn’t a chapter from the past. I realized what I knew all along. My three year stay in Hightstown was not so much one I never could leave behind, but rather one that’s been with me every day since. My space has a lot in it. Being a Peddie boy is a large part of it, as are many of the teachers I had there.

I can’t say with certainty that I learned a lot at Peddie. The experience and relationships were priceless. But I was never a motivated student or a self-starter. And the school begged for its boys to have direction and discipline. My years there overlapped with an insatiable appetite for having fun, or at least trying to. So, there’s that too. I received decent enough reports so that my space there was never threatened.

It may have taken a while after I left school to fully realize the impact it would have on the rest of my life. My classmates all went to universities, and had yet more campus experiences before entering what some call the real world. I left Peddie and fell almost immediately into my trade. I am perhaps one of the few graduates to have never gone to college. It wouldn’t surprise me to learn that I was among the first to have that distinction. Maybe Google knows! But I have to get back to my space now.

In looking back at how I have expanded my space since those scholastic years, the influence campus life had is immeasurable. I became part of a community at a very young age, lived away from family, and somehow found – or appropriated – an independent streak. Heck, I always had that, but it grew in spades while there. But it wasn’t until I realized how little value there is to experience unless it is shared, and how things acquired along the way don’t matter that much until you can comfortably and freely give them away – until I realized this, I never fully understood the amount of space The Peddie School takes up in my space.

I have shown the following letter many times before. I’ll show it again to make a point. Mr. Annenberg spent a lifetime giving back, with so much of it going to the school. I don’t think my space will have much meaning until I walk a similar path. I went to Peddie, and I took it with me when I left. 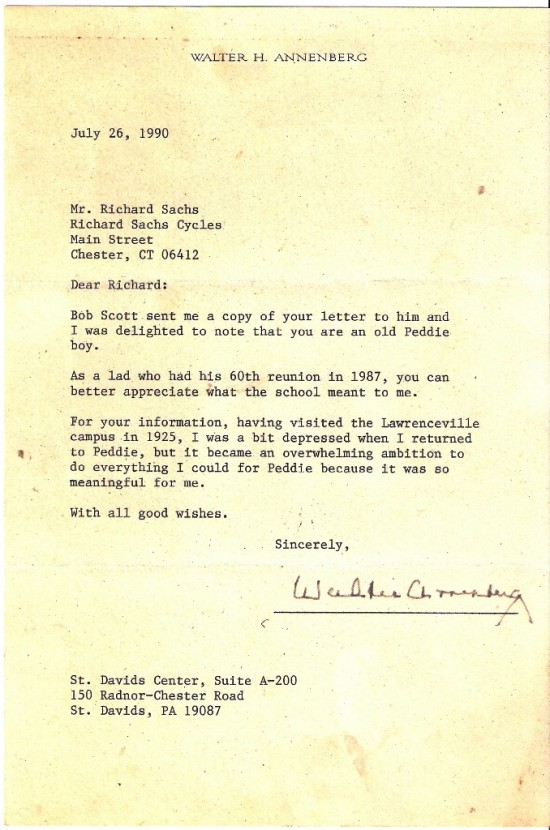