It may be the only thing here that’s never changed. Something that’s been on my bench since I began. A tool used to make every (single) unit bearing my name. And many that don’t, since I’ve been known to destroy a few. This axle. The skewer that goes through it. It’s the only piece of the puzzle that’s never been replaced, lost, reworked, upgraded. It’s a mid ’60s Campagnolo front hub axle with some cones seized in place. And a QR that I bent (curved) back in the early ’70s before they’d come that way. A relic. And inextricably tied to everything RS.

This bad boy serves a multitude of masters. It’s a go no-go check for my forks. I use it during dry fits to ensure blades are the correct length. When forks are done, I use it with a square as a way of checking that both blades are in plane. I have other tools. Sophisticated ones that weigh a lot and cost serious coin. But this lil’ gem is part of the process. The process. One that dates back to when we made things with no plug-in parts. And I mean the electronic ones rather than the IC components that came later. Ya there was a time when we (Peter, me, the people back in Deptford) made frames with no power tools at all. Dickensian Era etc etc. We made more units with less effort and everyone was happy. The future happened.

We have things. We should all have things. Things that if missing even for a moment we’d be lost. For me, life would stop if this axle wasn’t in plain view. Close enough to grab so I could check a fork dim. I wouldn’t even know where to find another.

PS The fork. That’s the thing that goes inside the head tube. Many know the head tube as part of that later day Y2K question, the one that goes, “How long is the head tube?” The fork slips inside of it and is often seen with a front wheel inserted. You can Google it. 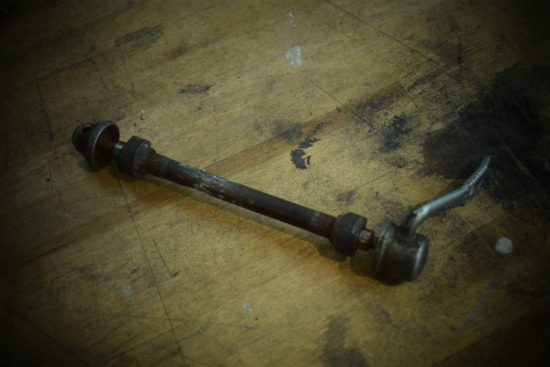