Oh Yes He Is

I have always been a clothes horse. As the Kinks would sing, a dedicated follower of fashion. From early on as a young boy, recalling those weekly trips to Schlesinger’s on Bergenline Avenue at 57th Street, I’ve been intense about what I wear. Maybe not intense, perhaps preoccupied, or focused, or more aware than a man of my gender should be. I have a uniform. And the hash-marks that define “uniform” are just wide enough to allow me some variations on a theme. The theme. My theme.

Long ago I fixated on the silk striped tie. But – now pay attention – not just any silk striped tie. It had to be an example that wasn’t the ubiquitous Old School slash club or organization type that many would associate with this style. With rare exception, I chose versions made in Italy and whose stripes descend from the heart rather that the more typical way – the way one might see at Brooks Brothers or its ilk. (Some interesting colors, a decent pattern to be found if you look long enough, but all of it going in the wrong direction.)

Here are some of my ties, many of which are from the late 1970s and still in heavy rotation. Among them are Borsalinos, Zegnas, a Mario Ceste, a Schiavi, one Marinella, and even a tie from J. Press, a maker who rarely shows stripes oriented this way.

I believe, I have always believed, that paying attention to apparel lines has helped me as a bicycle maker. Design. Color. Trends. Attention to detail. And of course, elegance. These know no boundaries. Watching how one segment works informs another, as long as you keep the shutter open and the lens clear. 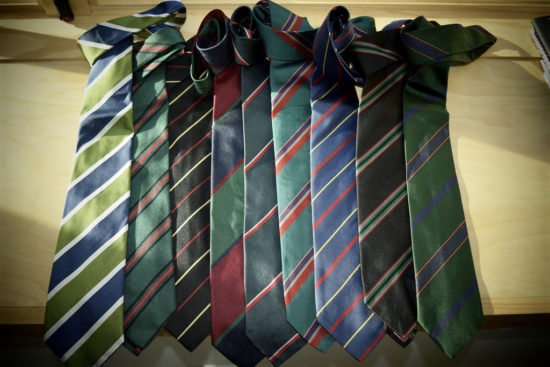 « French Connection
Confessions Of A Shooter »