I did a lot of racing on pavement. My first sanctioned event was in 1972. The Stowe Road Race. Before that, I had a steady diet of time trials in Burlington with GMBC. Every Tuesday we’d do the Cheesefactory Circuit. It was an eight mile loop and the series was my Baptism into riding as fast as I could, while trying to beat others. Doing this in a mass start event was another animal.

Those were different times. It was harder to figure out what to do in the middle of a bunch of guys each trying to get to the line first. It’s not as simple as training (I don’t even remember if we used that word) and then unleashing the fury. Racing is a mind game, made even more so when you consider team tactics. Even in the most local of races, there are folks combining with each other to capitalize on options. There’s no playbook that spells out how to deal with this, or fine tune your intuition so that your move trumps all others.

When you reach a level when fitness and savvy are in the toolbox, it’s wonderful. A gift. This, assuming you have the competitive gene to begin with. I’ve experienced very little that feels as good as having the race I wanted rather than the one left for me by others.

My last season on the road was 2001. This image is from the Killington Stage Race and I’m climbing Brandon Gap. I was having a good day. A good day.
. 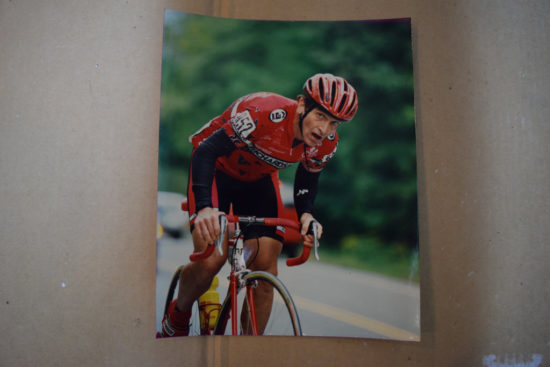