Through the years as the industry has decidedly become non-ferrous and placing so much emphasis on industrial-made bicycles, the need for high quality steel tubing and fine lugs to join them with became less and less. By 2000 I was thoroughly disenchanted with the supply chain and began plotting a way to become my own supplier as well as a resource for other peer framebuilders who also felt that the well was going dry. By 2002 my first set of modern era I.C. parts for what were now OS (over-sized) dimensions became a reality. I branded them Richie-Issimo. The set included a matching fork crown and bottom bracket shell. Within two years, I added the Newvex, Nuovo Richie, and Rene Singer lug sets and Piccoli Gioielli cast dropouts to the list of goods I offered to the trade. In 2004, working in tandem with Dario Pegoretti, and collaborating with Columbus in Italy, a design for a new tube set became a reality. The concept was to create the first 21st Century steel tube set specifically designed for artisan framebuilders who chose lugs as their joining process. PegoRichie tubing entered the vernacular by 2005. In 2011, a ÜOS (Über OverSize) version of PegoRichie tubing was added to the line, along with Sax Max lugs, bottom bracket shells, front derailleur braze-ons, and a 28.6mm fork crown sized for 27mm ÜOS fork blades.

If someone asked me about the state of framebuilding in the late 1990s, I may have sounded discouraged, jaded, and even poor-mouth. Part of me still had ties to the romantic and humble beginnings of an earlier era. Along the way, I was able to reverse engineer some of the trends leading up to Y2K and put myself in the position of designer for, and as a supplier to, many of the fine craftspeople who now comprise the framebuilding community. 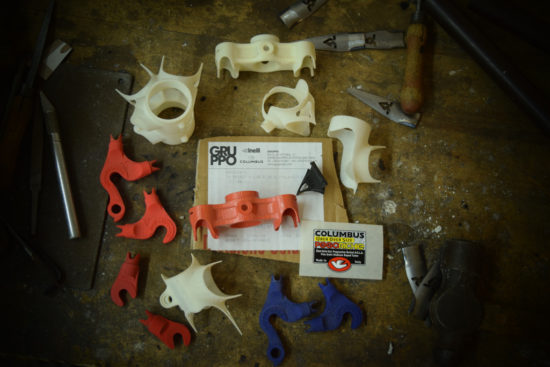