Having gone from one period of disillusionment to another, and through several more before the 1980s arrived, believing I hadn’t reached a level of competence, I began to realize that my life as a tradesman happened by accident. Some plan their pursuits, map out a path or two, and starting walking. The bicycle thing was deep in my veins, but the making part of the equation was the result of several turns I took since leaving The Peddie School. Five years after graduating, and never having set foot in a classroom again, I was standing at a workbench and had my name over the door.

I wasn’t classically or even formally trained. But I took my experience from London, coupled it with some time in East Haddam, and started a brand. It felt good. It was fun, unorthodox, and a wonderful way to enter adulthood. But it all caught up to me after a decade, leaving me feeling like I faked it as far as I could – and yearned for something to keep me inspired and in the game.

That something came in the form of looking outside my niche and finding pockets of elegance that I could take back into daily life and move it forward. A passage from this 2004 feature in Watch Time reads, “Another defining moment was when a customer pointed out the similarities between what he does and what the English shotgun manufacturer James Purdey & Sons has been doing since 1814.” That moment came in 1981 when a client from Darien collected his second RS commission.

In a strange but much needed way, the muses I find away from the bench are what enable me to stand at it longer and with a deeper commitment to make the perfect bicycle, one at a time.
. 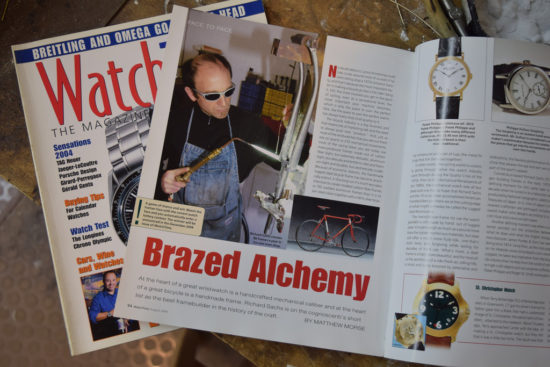