The concept of focus has been swirling around my head lately. Where should my attention be. That sorta’ thing. In recent years I’ve found that the more I let go the happier I am with where I arrive. That also applies to the walk over, regardless of how long/short the path is. I once heard Beattie describing a downhill on ABC, or maybe it was Brooker. He, or they, were talking about “letting the skis run.” I can’t recall who was hurling himself down the mountain. Not important. The thing is, when I get into a place where the rules aren’t so much ignored as they are forgotten about for a spell – when I let motion take over – I’m more satisfied. I gotta phrase it another way so I’m more clear: there’s this trust I put in letting the work happen. When I don’t give thought to each file stroke, or heating cycle, or whether center lines are justified – when I just put my hands over my eyes and start winging it – that’s gold, Jerry. Gold.
. 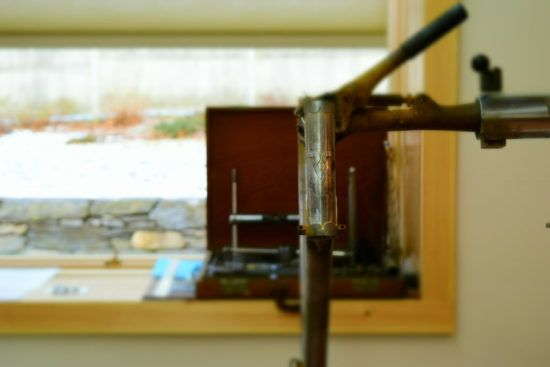